WT Birkalla will be looking to put an end to their seven-game losing streak tonight as they face Adelaide Comets at ServiceFM Stadium. After last week’s 3-0 defeat to league leaders West Adelaide, WT Birkalla dropped into the bottom spot which now sees them face a difficult challenge in their attempts to survive the drop. In the team’s last seven losses, they have been held goalless in six, which sees them remain the league’s lowest scoring team with only seven goals scored in 14 games. Currently, only one point separates WT Birkalla and Modbury Vista with four games remaining in the season, meaning gaining a point this week will be valuable in the team's ambitions.

WT Birkalla recorded only their second point of the season last time they met Adelaide Comets, with the gaming finishing 2-2. Kate Seaton opened the scoring for WT Birkalla in the 12th minute giving her side an early lead. WT Birkalla held their lead strongly, however, a 61st-minute Nanako Sasaki and 86th-minute Kiara Osullivan goal saw Adelaide Comets take the lead. Mariah Aplin secured an important goal in the 89th minute, as her strike earnt WT Birkalla a valuable point.

The race for a place in the top five is well and truly on, with Adelaide Comets currently in pole position to take a Finals Series spot. Currently experiencing a three-game winning streak, Adelaide Comets sits within the top five, holding a two-point gap between themselves and fifth-placed Football SA NTC. Chrissy Panagaris has been vital in the team’s success this season, with the striker scoring 17 goals in 13 games, with her two goals last week helping the team secure a 2-1 victory over Adelaide University. With a difficult end to the season incoming for Adelaide Comets, with the team still set to face the current top two in the coming weeks, three points this round is vital for the team. 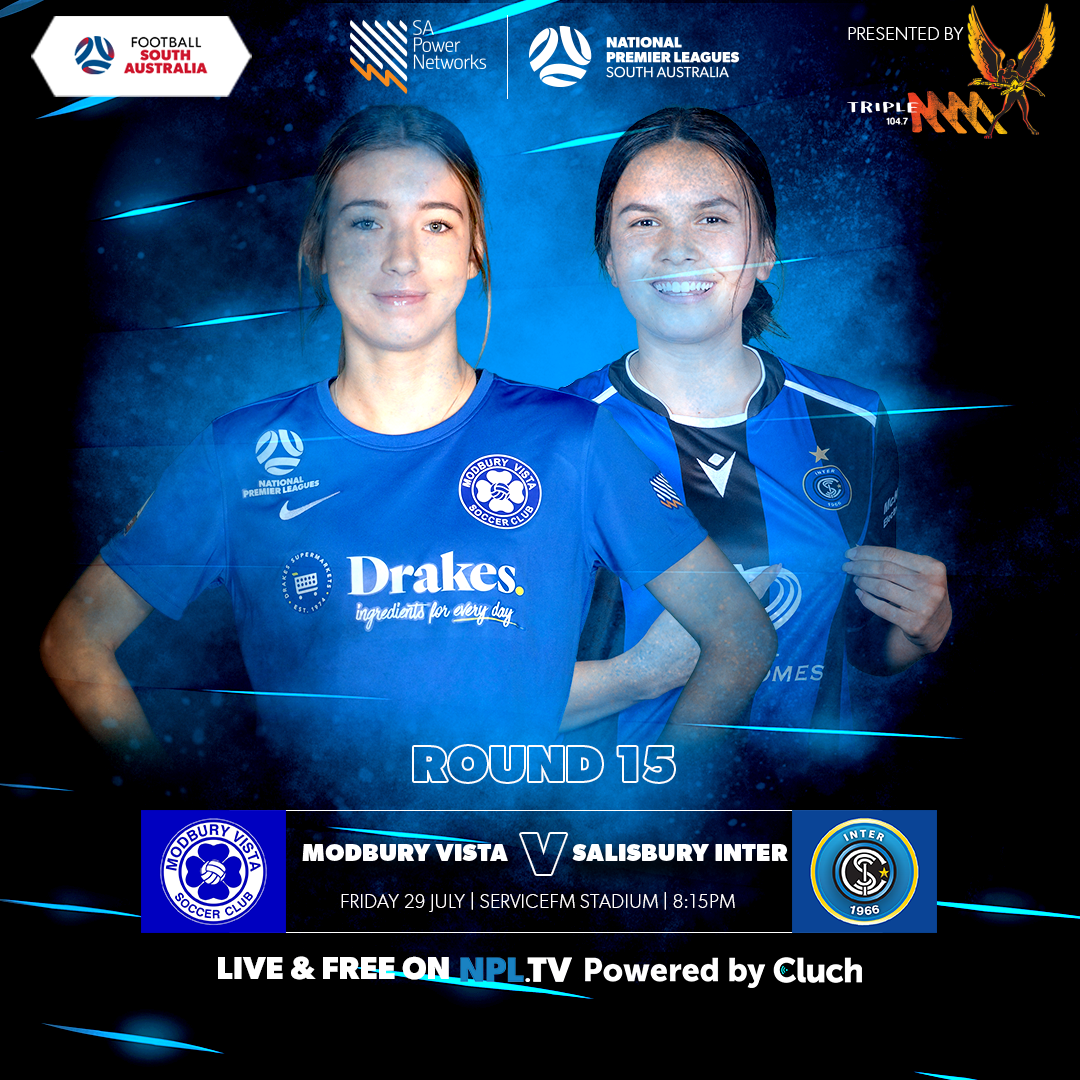 After securing only their fourth point of the season, Modbury Vista has seen themselves leave the bottom of the WNPLSA which now see them sit in ninth. It’s been a turbulent season for Modbury Vista, with the team currently still without a win in league competition, however, have looked much more positive in recent weeks with the team taking a point in their 3-3 draw with Fulham United. After falling behind 3-1 within the opening 30 minutes, Modbury Vista fought hard late in the second half to secure a point, with Alana Fitzsimmons and Leah Noto both securing goals each. With their fight for survival still alive, every point will be valuable for Modbury Vista in their last four matches.

Salisbury Inter won comfortably in their last meeting with Salisbury Inter in a match which saw an Emily Heazlewood double and goals by Nicole Calder, Maria Rojas Pino, Khal Adam Khan and Jasmine Styles lead the team to victory. Elisabeth Dodds was able to score one on the day for Modbury Vista, with the match finishing 6-1.

Round 14 saw Salisbury Inter secure their ninth win of the season as they beat Metro United WFC, with a 70th-minute Nicole Calder goal securing all three points. Currently outside the top two, Salisbury Inter sits only one point off second place Adelaide City and is eager to continue their pressure as they seek to overtake them before the end of the season. With a clash with Adelaide City incoming next week, three points are vital for Salisbury Inter against Modbury Vista this week to keep the top two hopes alive.

Adelaide University’s hopes of securing a place within the top five have slightly faded away after facing back-to-back defeats, which has seen their gap with fifth place Football SA NTC increase to four points. It was heartbreak in Round 14 for the team as a last-minute Adelaide Comets goal cancelled out Chanel Todino’s 65th-minute finish, leaving Adelaide University with their sixth loss of the season. With the team still desiring Finals Series football, a win will put Adelaide University in a great position to secure a place in the top five this season, with a victory taking them to only one point off fifth.

It was a 1-1 draw in Adelaide University’s last meeting with Football SA NTC, with a 68th-minute Gemma Macfarlane finish securing a point for her team after Claire Scarpin opened the scoring for Football SA NTC in the fifth minute.

Football SA NTC’s push for a place in the top five is well and truly alive, with the team sitting four points clear of fifth-placed Adelaide University. Their impressive recent run of form was capped off last week with a big victory over second-place Adelaide City, as goals by Claire Scarpin, Emilia Murray and Sasha Coorey provided Football SA NTC with a 3-2 victory. That win has seen the team stay within touching distance of making their second consecutive appearance in the Finals Series. With a difficult run incoming which includes a clash with fourth place Adelaide Comets next week, three points are vital for Football SA NTC in Round 15.

Facing their seventh defeat of the season last round as they lost 1-0 to Salisbury Inter, Metro United WFC’s Final Series hopes are starting to fade away with a five-points currently separating them and fifth, with only four games remaining. Although dropping points on numerous occasions over the last few months, Metro United WFC have dramatically improved in their defensive output, with the team conceding two or more on only two occasions in their last eight matches. With the season gradually coming to an end Metro United WFC will be hoping to experience a strong end to the season, with a win over Adelaide City setting them up perfectly.

A late Zoe Tolland goal gave Adelaide City the victory in their last matchup with Metro United WFC, with the team securing a 2-1 victory. A Katie Bowler 30th-minute finish provided Adelaide City with the lead, however, Victoria Mansueto equalised not long after for Metro United WFC, with Tolland’s 79th-minute finish earning her side the three points.

Adelaide City’s hopes of the Premiership were dealt a major blow last round as the team fell to their fourth defeat of the season as Football SA NTC beat them 3-2. A 45th-minute Valeria Guajardo and 89th-minute Dylan Holmes goal were unable to provide Adelaide City with any points in their Round 14 clash, with the loss now seeing them drop to seven points from the top spot. Three points are vital for Adelaide City as a loss could provide West Adelaide with the Premiership (if they are to win) with three games to go while dropping any points could potentially see Salisbury Inter overtake them in second.

Fulham United FC is set to face a difficult challenge as they face league leaders West Adelaide who are looking to secure the Premiership in Round 15. Fulham United FC will be devastated to have missed the opportunity to secure their second win of the season as the team dropped a 3-1 lead to draw 3-3 with Modbury Vista in Round 14. Angela Mills continued her impressive goalscoring run as her two goals took her tally to five goals in three games, while Susan Roberts recorded her first of the season. Three points still only separate Fulham United and Modbury Vista in ninth with four games remaining.

It was a 6-0 win for West Adelaide the last time they met Fulham United, in a match that saw Meleri Mullan and Harriet Burnett both secure braces, while Racheal Quigley and Laura Johns both grabbed goals each.

West Adelaide’s dominance in the WNPLSA has continued for another week, as the team remained 13 games unbeaten as they secured a 3-0 victory over WT Birkalla in Round 14. First-half goals by Harriet Burnett and Emily Hodgson and a goal by Anna Pritchard just after the break, saw West Adelaide take a seven-point lead at the top of the WNPLSA ladder. West Adelaide could secure the Premiership this weekend if they are to beat Fulham United and current second-place Adelaide City are to lose their matchup.

There are now only four rounds remaining in the Women’s State League for season 2022, with numerous teams still looking to secure automatic promotion and a place in the promotion play-off match. South Adelaide and Modbury Jets open Round 15 tonight at O’Sullivans Beach Sports and Community Centre in an exciting clash. South Adelaide was left devasted as their push to go top of the WSL felt a major blow as they dropped five points from the league leaders Flinders United after they faced a 2-0 loss to them last week. With a promotion play-off match in their sights, three points for South Adelaide be extremely valuable. Modbury Jets will head into the clash in great spirits after they secured an impressive 4-2 win over Adelaide Jaguars last round, which now see them sit only two points from fifth. In other action sees Adelaide Jaguars look to end their four-game losing streak as they take on an Elizabeth Grove side who are on the back of a 2-1 loss to Cove FC in Round 14. To close off Round 15, Cove FC play host to Adelaide Hills as both teams look to stay in the running for a chance at the Promotion play-off match. Both teams currently sit on 19 points, six points away from second place, with a win being needed to have a chance of securing second place come to the end of the season. Campbelltown City and league leaders Flinders United have a bye in Round 15.