The Quarter Final of the Australia Cup South Australian qualifiers begins tonight. We have two exciting matchups, with three State League One clubs and one State League Two club fighting for a place in this year's Qualifying Finals. We take a quick look at each matchup. 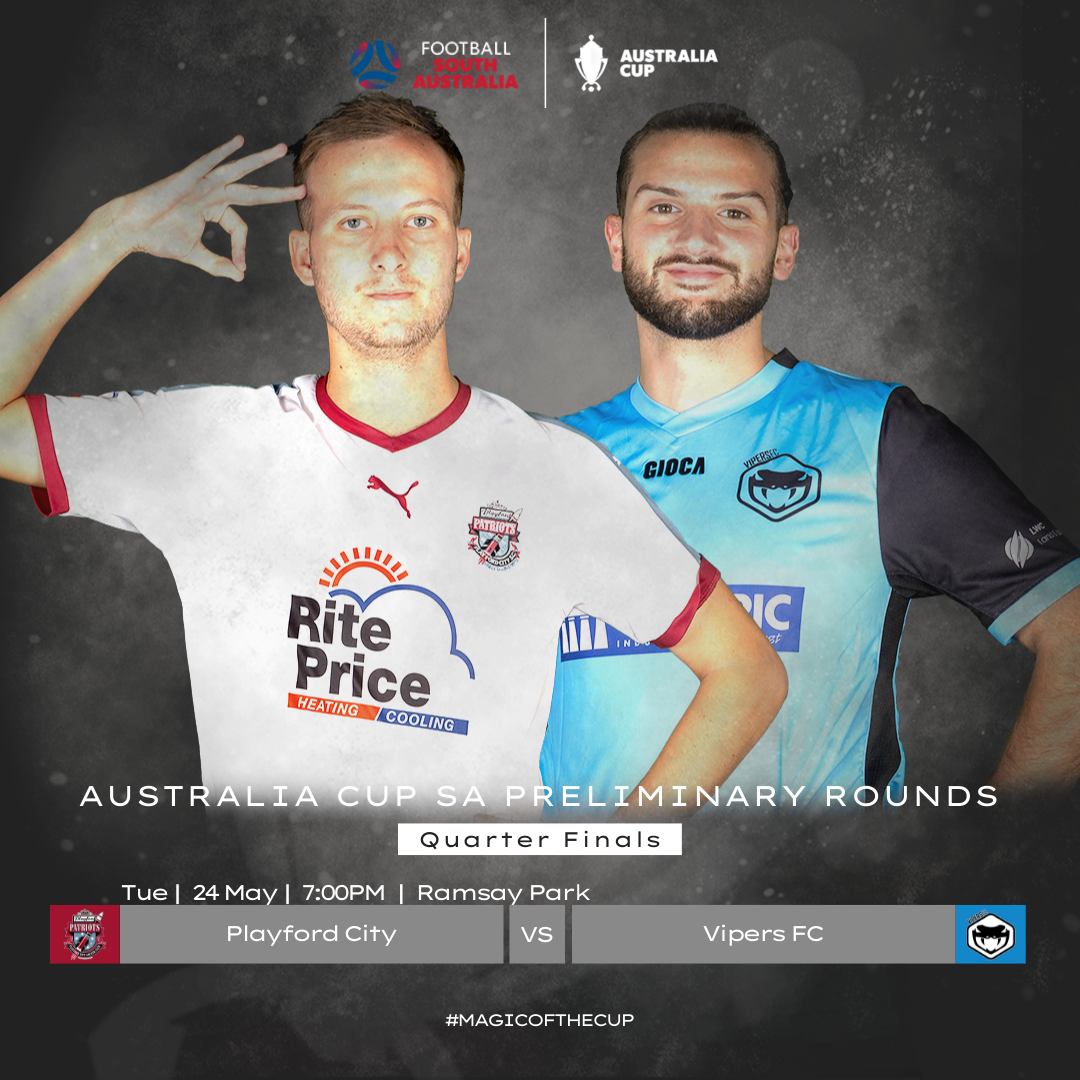 Both teams search to make their first appearance in the Australia Cup SA Preliminary Rounds Qualifying Finals as they face off in an exciting encounter at Ramsay Park tonight. To Reach the Quarter Finals Playford City secured a shock victory as they beat RAA NPLSA powerhouse MetroStars with Daniel Ryan converting a 90th-minute penalty to send his side into the next round. Currently sitting in sixth in State League One, Playford City has been in struggling form since their Round of 16 victory over MetroStars, losing two and only winning one. In their last fixture, Playford City lost to State League One's current bottom side Adelaide Hills 3-1. Although this bad form, Playford City have extraordinary firepower in the front three that can cause numerous issues for tonight's opponents. Vipers FC will be eager to continue their unbelievable run of form that has seen them remain unbeaten in all competitions since February 26th. Since their last loss, Vipers FC has recorded five wins and four draws in State League Two which now see them sit in third while winning each game in their Australia Cup run to reach their first Quarter Finals. Vipers FC beat Port Adelaide 1-0 in the Round of 16 to earn a place to fight for a spot in the Australia Cup SA Preliminary Rounds Qualifying Finals. Which club will be the first to make the Final Four in this year's competition? 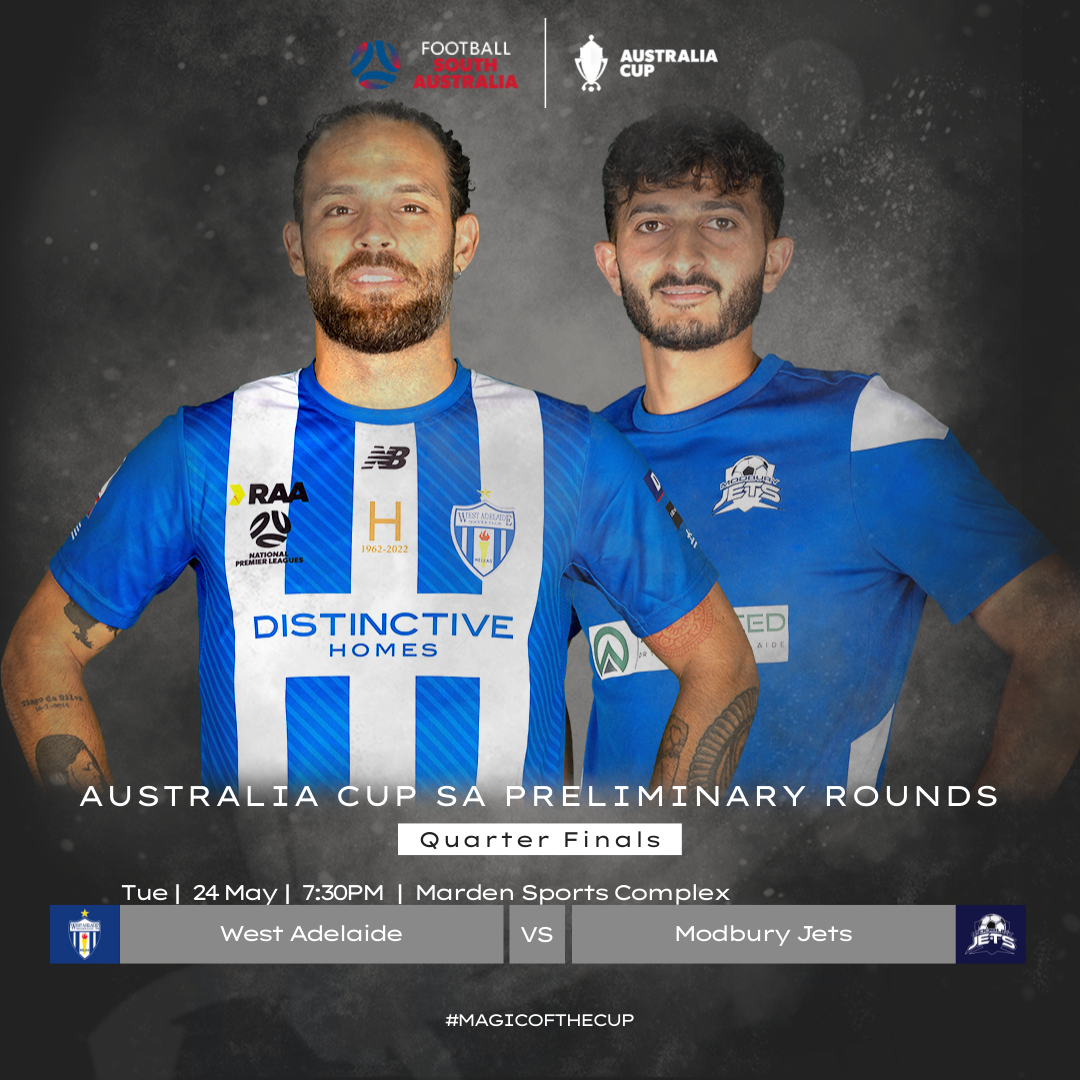 No strangers to each other, Modbury Jets face off against West Adelaide tonight at Marden Sports Complex to earn the second spot in this year's Australia Cup SA Preliminary Rounds Qualifying Finals. Both sides met early this year in State League One competition, as they played off in a well contested 1-1 draw, which saw Hamish McCabe's convert a 73rd-minute penalty to rescue a valuable point for Modbury Jets. West Adelaide reached the Quarter Finals of this year's competition after beating Croydon FC 1-0, with Ricardo Da Silva's 67th-minute finish being the decisive kick against a strong RAA NPLSA side. However, since this win, West Adelaide is yet to win a game, losing once and most recently drawing with Adelaide University 1-1, which has ultimately seen them drop to fourth. West Adelaide search for its first appearance in the Australia Cup SA Preliminary Rounds Qualifying Finals. Their opponents Modbury Jets have been the standout side in this season's State League One competition, as they currently sit in first with eight wins, two draws and only one loss in eleven matches. In their hunt for a place in the Quarter Finals, Modbury Jets knocked off RAA NPLSA side South Adelaide 4-3 in the Round of 16. Since this victory, Modbury Jets have experienced a mixed run of form, losing their first game in Round 10 of State League One to Adelaide Blue Eagles 4-2, then making an extraordinary late comeback against Eastern United in Round 11, as the McCabe brothers scored three goals in four minutes after the 86th minute to secure a 4-2 win after being 2-1 down. Modbury Jets look to make the Final Four for the first time since the 2018 season.