On The Bench | with Tracey Jenkins | Female Football Week

We now get to know the coaches who will be leading their teams out onto the turf in the WNPLSA this season. As part of Female Football Week, we start off with West Adelaide coach, Tracey Jenkins. 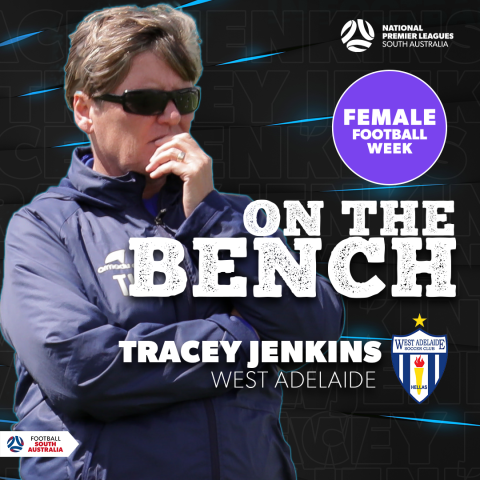 Why did you become a coach?

I love the game and it was an natural progression.

Who is your coaching idol; and why?

I have had several coaches who I admire who offer different things.

Most coaches I've met no matter what level bring something to the table and I've learnt from.

What has been your biggest achievement(s) as a coach?

Building belief and self confidence in a group and  individual players.

Best SA team to watch, past or present, that excites you as a coach.

I have to say honestly the current West Adelaide womens team has to be one of the most exciting groups to coach and watch.

The culture and desire to play one and two touch football. Be creative and challenge themselves is really entertaining.

They are a team who play for one another.

What excites you most about the 2022 Season?

Working together as a unit to problem solve the challenges other teams will throw at us.

Watching the players challenge themselves and play with freedom.

Name a player in your squad under the age of 23 who we should look out for in 2022 and why?

West Adelaide is privileged to have some very exciting under 23 players.

All of them offer something and I honestly can't seperate them.

Each of them at different stages of their football journey but really developing and exciting to watch.

Which new transfer are you most excited to be working with and why?

We've got several players who have returned to or joined the club in the past few years.

We have young and up and coming players who have joined us such as Emily Gale and our young goal keeper Charlie.

The coaching team is excited about all these players.

They are hardworking, experienced. Unselfish and want to play good football and build their own game but more importantly each others games.

An example of this our players from last year  Laura Johns, Georgia Macri, Maddie Durieu  and Nicole Blackett who are keen to take their chances but are as focussed on the goal assists to our rising stars Harriet Burnett and the outstanding new signing Racheal Q.

As a coaching group we are privalaged to have such a fantastic group of last year's Hellas players and new or returning players.

And finally....Besides finishing as high in the table as possible, what are your goals for the season ahead?

We want to play good football. Develop the player group . Develop a strong culture where every player feels they can learn and improve.

Create a culture where players can have an input into the style of football they want to play.