Campbelltown City and Adelaide City battle it out to #ReturnToCoopers 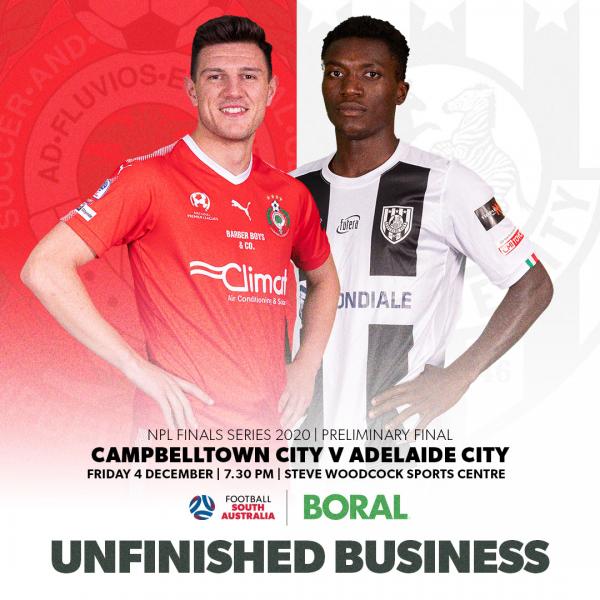 The end of the 2020 NPLSA season is nearly upon us, but not before Campbelltown City and Adelaide City duke it out for the coveted second spot in next Friday’s huge Grand Final at Coopers Stadium.

The winner of tonight’s match will progress through to the decider, where they will face this season’s minor premiers in Adelaide Comets.

Campbelltown enter the contest off the back of a disappointing 3-0 loss in the second leg of their semi-final with Comets after holding them to a 0-0 in the first leg.

They will be more than motivated to bounce back from that result, though, and the side has a strong track record of getting through tough periods following a lean patch at the start of the season that they successfully recovered from.

It was just the third time in 24 matches this season that Campbelltown conceded more than two goals, who finished the season amongst the most miserly defences in the competition.

They will enter the match with confidence having not lost to City over the past three seasons, which also included the 2018 NPLSA Grand Final that was claimed by Campbelltown 1-0.

It's been a long season, but Alex Mullen says the Red Devils are fully focussed on the task at hand.

I think when there is a trophy up for grabs, motivation takes care of itself. Yes this season has certainly been interesting, but we have used that to dig deeper. A lot of our players have made tremendous sacrifices to continue the commitments of playing NPL so far into the year. This says a lot about the characters in our team, they want to win more than ever.

The majority of our squad have been involved in the last two championships and know what it takes in these big games. We believe if we can stick to our game plan we will be very difficult to beat.

The last time the sides met...

City, meanwhile, have been the dark horse of the finals series, scraping into sixth spot in the final round to return to the top six after a disappointing 2019 campaign.

City midfielder Nic Bucco says the squad is in good shape after the temporary suspension due to COVID, and the 'dark horses' label is justified and believes City are capable of pulling off an upset.

The 'underdog label is justified as we finished 6th and haven't beaten them [Campbelltown City] this year. We know finals football is different and we believe we have the tools to win it!"

Having entered both of their matches thus far as a comfortable rank underdog, City blew high-flying MetroStars away 4-1 before easily accounting for Croydon Kings in a 3-1 triumph.

City forward Terence Carter could prove to be their X-factor in this crunch match after finding the back of the net four times in their two finals victories.

The boys in Black and White will be seeking vengeance after their loss to Campbelltown at the pointy end of the 2018 season, and there may not be a better time for them to exact their sweet revenge.

With everything on the line in this preliminary final, who will end the match victorious and take on Comets in the Grand Final next week? Catch all the action on the live stream tonight!