Entering the final round, Comets needed to better City’s result to finish the season in first place, while Olympic started the match in sixth and knowing that a win would guarantee finals football.

It was the visitors who drew first blood, with skipper Fausto Erba opening the scoring for Olympic with a 24th-minute strike that took them through to half-time a goal to the good. 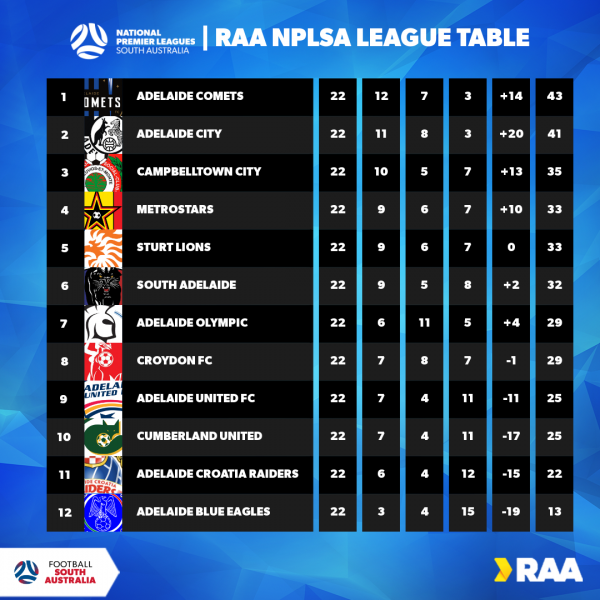 Comets shot out of the blocks in the second half, as strikes from Lachlan Stead and Ryan Yates gave them a 2-1 lead less than ten minutes after the restart, but Olympic’s Michael Cittadini restored parity on 79 minutes.

When it looked as though silverware would be heading the way of City thanks to their 87th-minute equaliser against Croydon FC, Nathan Andijanto broke through for Comets, receiving Ninko Beric’s pass to feet and working it into the bottom corner to send the crowd into raptures.

The result meant that South Adelaide booked their finals tickets with a thumping 5-2 victory over nine-man Sturt Lions, while Marc Marino won the league’s golden boot with a brace in Campbelltown’s 4-0 thrashing of Blue Eagles, which sent them to third.

Cumberland United secured their NPL survival in emphatic style, with four Thomas Briscoe goals against United putting them beyond the reach of Adelaide Croatia Raiders, who were relegated despite their 1-0 away win over MetroStars.