The State League Review | Round 12

This weekend’s Northern derby lived up to the hype, with the 2-2 draw going down to the absolute wire. The entirety of the match was tense, and for the first 75 minutes the two sides could not be split. This deadlock was broken by Veart in the 76th, who put his side 1-0 up after getting on the end of a breathtaking cross to the far post. The intensity only rose from there, to the point where it was almost tangible. To intensify things further, Daniel Ryan produced another moment of brilliance, getting on the end of a rebound from his own free kick – Ryan converted from distance and put Playford back in the contest. The drama continued in the 91st, as Wegener got on the end of a delicate lofted through-ball and buried it into the bottom left. Jets looked as if they’d snatched the points and won local bragging rights. However, Playford never gave in – particularly their main source of goals, Josh Farrell, who broke Modbury hearts with an equaliser in the 95th minute.

Birkalla got the job done against Cobras with a 1-0 victory at home, courtesy of a Tyreece Conway far-post volley on the stroke of half-time. Strangely, not one team changed ladder position this week – so Birkalla’s win sees them hold onto 3rd, whilst Cobras still sit in last.

Eastern United and Adelaide victory played out a 1-1 draw at Athelstone, a result that Victory in particular will be disappointed with as they gave up a chance to find themselves back in the top six. It was the away side who scored first, with Alex Dimasi converting three minutes prior to half-time. Matija then scored in the 65th and put his team back into the game, but the two sides could not be split from there. Eastern’s point puts them one step closer to overtaking West Adelaide, but they still sit in 11th. Victory sit in 7th, equal on points with 6th placed Western Strikers.

A first-half four-goal blitz in the Western Strikers v Adelaide Hills game suggested that an absolute goal fest was about to unfold, but the twenty-minute flurry was to be a once off – as it remained 2-2 for the remainder of the game. Scambiatterra got the home side up and about in the 10th minute, but his goal was quickly cancelled out by Hawks’ Ollie Grant in the 16th. Strikers immediately responded through Murray in the 20th, but Adelaide Hills had another immediate response through Elms in the 22nd. Both sides hold onto their place on the ladder.

White City were victorious once again, beating 9th placed Fulham 2-0 at home. A strike from Butler-Bowdon in the 30th along with a Fulham own goal was the difference.

Para Hills secured a come from behind win against the struggling West Adelaide, coming off the Paddocks with a 2-1 victory. Andrea put Hellas ahead in the 41st, but it was the Knights who came out of the sheds firing – as Ahmed and Nestoras restored order with a goal each in the 59th and 64th respectively. 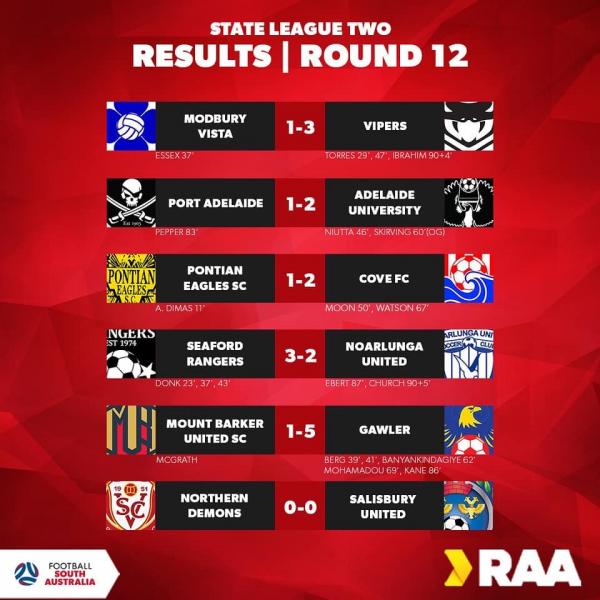 Adelaide Uni edged Port Adelaide 2-1, in this weekend’s top of the table state league two clash. Niutta gave Uni the lead just a minute after the half-time break. An own goal in the 60th gave Uni the breathing room they needed, the two-goal cushion was enough to see off Port Adelaide’s goal in the 83rd – and take top spot.

Vipers continued their sensational form, by dispatching of 11th placed Modbury Vista 3-1. Torres also continued his fine form, scoring two goals for the away side and setting up the win. This win sees Vipers into 3rd, whilst Vista still sit in 11th.

Cove secured an impressive 2-1 away win over Pontian Eagles. Goals from Moon and Watson gave Cove the lead, and by holding on – they now move into 7th.

A hattrick from Seaford’s J. Donk was enough for the Rangers to overcome Noarlunga 3-2, and secure local bragging rights. Donk secured his hattrick within twenty minutes, scoring in the 23rd, 37th and the 43rd.

Mt Barker’s woes continued as they fell 5-1 to Gawler. Berg scored for the Eagles in the 39th and 41st, Banyankindagiye in the 62nd, Mohamadou in the 69th and finally Kane in the 86th. Mt Barker have really made 12th spot their own this year, whilst Gawler hold onto 5th for the time being.

Salisbury will be disappointed as they drew 0-0 with the struggling Northern Demons, and in doing so fall to fourth place.