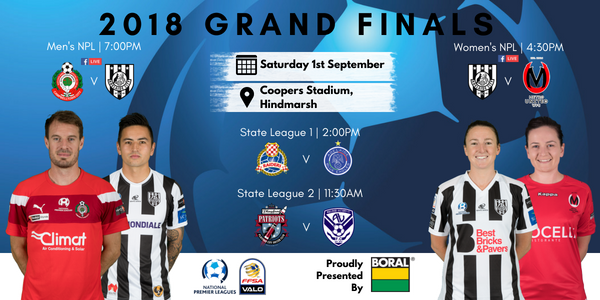 South Australian football heavy-weights Campbelltown City and Adelaide City will go head to head for a 5th time this season as they fight it out for the title of 2018 National Premier League South Australia Champions.

Campbelltown will look to capitalise on a stellar regular season, recording 16 victories on the way to securing the minor premiership, where they finished 5 points ahead of their Grand Final opponents.

Adelaide City will be out to quash an eight-year Grand Final hoodoo, unable to record a win on the big stage in any of their 4 appearances since overcoming Adelaide Blue Eagles back in 2010 – which includes a 1-0 defeat at the hands of Campbelltown in 2016.

In their most recent encounter, it was the Red Devils who came out on top, securing a 1-0 win at Steve Woodcock Sports Centre. An Alex Mullen strike in the 102nd minute was enough to seal an aggregate win for Joe Mullen’s side and a week off to freshen up before Saturday’s final.

Adelaide City on the other hand had to do things the hard way after losing the two-leg semi-final playoff, overcoming MetroStars last Saturday evening at Adelaide City Park 2-0 courtesy of an impressive first half display.

Shannon Day opened the scoring for the black and whites, blasting a free-kick around the wall and into the bottom left corner of the goal.

Shortly before the half time break the home side was at it again, left back Scott Nagel cutting in from the left and unleashing a strike that Metro keeper Isaac Carmody could do nothing but parry into the path of the always dangerous Anthony Costa, who made no mistake from close range.

Campbelltown City has a mental advantage over their rivals, knowing they’ve been able to account for them on multiple occasions already this year, including a three-goal victory at Adelaide City Park back in Round 13.

Joe Mullen’s side own the title of best attacking team in the competition, bagging a total of 54 goals from their 22 home and away fixtures, not relying on one individual to carry the load for the team – Kirk (12), Ditroia (11), Alex Mullen (7), Marino (7) and Fyfe (5) have all contributed throughout their campaign.

Mori’s troops have by no stretch lacked potency in front of goal, netting 52 for the season through significant contributions from Anthony Costa (17), Bucco (7) and Kostopoulos (6) – the latter of the three leading scorers to miss the Grand Final through suspension.

It’s Adelaide City’s defensive qualities that are most notable this season however, conceding the fewest goals of any side with a total of 19. Campbelltown second best in this category with 24 finding a way through their defensive line.

Expect the versatile and experienced Joel Allwright to slot in beside City captain Matthew Halliday at centre back again this week after Jackson Stephens suffered a tragic season ending injury only two weeks ago on the training track.

Will Campbelltown ride their confidence all the way to a second major trophy this year, or will City relish the opportunity to go into a game with the unfamiliar status of underdogs?