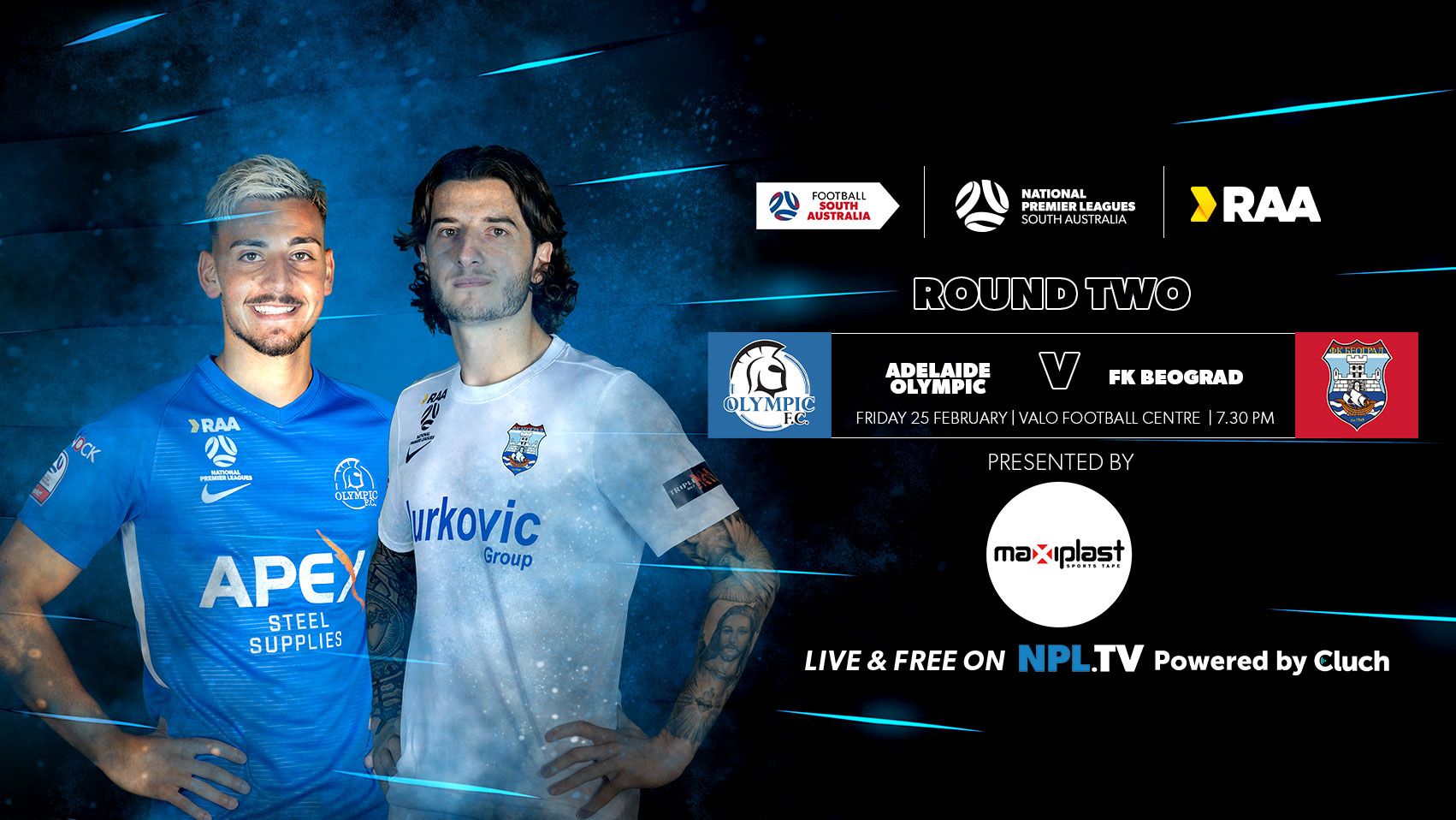 It’s a matchup that most spectators have never seen. Adelaide Olympic and FK Beograd face-off in their first competitive league fixture in almost 10 years, with their last coming in 2012. With FK Beograd’s relegation from the RAA NPLSA in 2015 and Adelaide Olympics’ promotion from the State League that same year, both teams avoided crossing paths.

FK Beograd’s return to the RAA NPLSA did not go to plan, as they fell to defeat against an impressive South Adelaide side 3-0. There was not much to celebrate for FK Beograd in Round One, as their new star-studded strike force struggled to challenge the South Adelaide goalkeeper, while at the other end, their defence failed to prevent conceding goals.

In preparation for this tonight's Match of the Round, striker Ninko Beric discussed:

We have worked hard this week and fine-tuned a few things to improve on last week which wasn’t a bad performance but we know we got a lot more to offer.

When asked how their team would look to improve in their upcoming match, Beric stated:

We have to be more ruthless in front of the goal and a bit tighter in defence but are ready for the challenge.

Adelaide Olympics’ start to the 2022 RAA NPLSA season ended in heartbreak, as an extra time MetroStars winner handed them their first loss of the season. Christos Pounendis demonstrated his great eye for goals as his long-range effort put Olympic in the lead in the 32nd minute, while new signing Dylan D’Agostino gave his new fans a great insight into his goalscoring ability as his 89th-minute equaliser looked destined to secure a point for his new club.

“got off to a flying start in the first half dominating the game [before] going into the break. Unfortunately, we allowed a lack of discipline creep into our game giving Metro a 10-minute spell to get back into the game and in the lead.”

When asked how the team would look to improve in their upcoming match against FK Beograd, Pounendis stated “We will focus on staying disciplined and doing our own individual goals as best as we can to help out the team.”

With his final thoughts before their Round Two fixture, Pounendis is confident that

“if we do that for the full 90 minutes, we will be able to play our best football and come home with the three points against a strong FK Beograd side.”

After facing defeat in Round One, both teams will look to move forward and pick up their first points of the season.  Round Two’s Match of the Round will be one to watch. 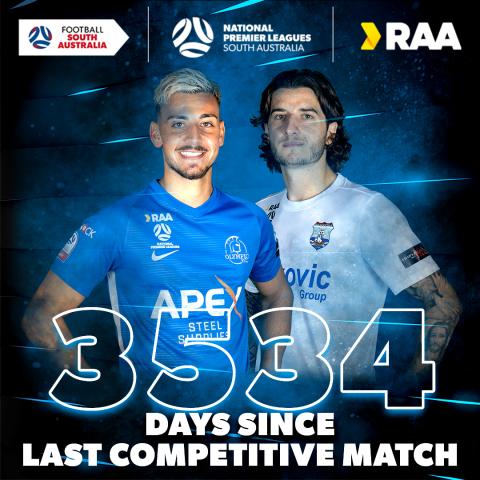 Campbelltown City will be disappointed to have missed the opportunity to pick up three points in their round one fixture with Adelaide City, as it marks a second consecutive season losing to their rivals in the season opener. After beginning his Campbelltown City career on the wrong foot with a 3-1 loss, coach Michael Matricciani will look to bounce back and pick up his first three points of the season.

However, a strong MetroStars side stands in their way. Jackson Walls’s 92nd-minute winner saw MetroStars pick up a big win over a strong Adelaide Olympic side. It was MetroStars youth that carried their side to victory as goals by youngsters Alessio Melisi and Francesco Schimizzi saw their side take the three points in their 3-2 victory.

Two sides who picked up three points in round one face off tonight, as Croydon FC take on last year’s Champions Adelaide City who are keen to make it two in two.

Antoni Trimboli’s thunderous 15th-minute volley gave Croydon FC an early lead before Adam Martinello converted the rebound off his missed penalty kick to cap off a 2-1 over Cumberland United, securing three points to start the season. Travis Dodd’s team look in great shape to start the season and will look to continue their great form.

Adelaide City topped off an impressive season opener with a 3-1 win over a strong Campbelltown City, which saw Aladin Irabona, Charlie Devereux and Onyelukachi Chikwuba all open their accounts for the season. Last year’s Champions have picked up where they left off in 2021 and will aim to continue their great form.

After Croydon FC prevented them from securing the league Premiership with a final round 1-1 draw, Adelaide City will be looking for revenge over their opponents.

Cumberland United host Adelaide Comets at A.A Bailey Reserve tonight in a match that presents an opportunity for both sides to record important victories early in the season.

After their 2-1 loss to Croydon FC in Round One, Cumberland United will look to bounce back after a shaky performance. Jack Schoen’s 77th-minute header was not enough for Cumberland United to gain any points in their first fixture of the season.

Round Two will not get any easier for Cumberland United as they take on a frightening Adelaide Comets team, who are fresh off a 5-0 win over WT Birkalla. Comets dominant Round One performance will send major concerns to all upcoming opposition. Nikolas Ikonomopoulos was the star of the show as the young attacker provided two goals and an assist to help his team gain three points.

After their Round One loss which saw them lose 5-0 to Adelaide Comets, WT Birkalla will aim to settle into RAA NPLSA life much better in Round Two. WT Birkalla failed to prove a threat to last year’s league Premiers and will attempt to put their first-round horror behind them as they host one of South Australia’s most informed teams.

Tyreece Conway returns to Jack Smith Park as he looks to put more salt in the wounds of his former club. Conway returns to face his former club after a stellar first-round performance which saw him score twice in Sturt Lion’s 3-1 opening-round win over Adelaide United FC. Sturt once again looks a dangeours attacking outfit in 2022 and will attempt to climb the RAA NPLSA ladder.

This is their first meeting since the 2020 State League One campaign, in a season that saw Sturt Lions become State League One Champions and gain promotion into the RAA NPLSA. Sturt will hope to continue their winning ways, while WT Birkalla will hope to settle into their new division sooner rather than later.

South Adelaide enters the second round in great spirits after they knocked off recently promoted FK Beograd 3-0 in a performance where they dominated proceedings. Incredible counter-attacking plays saw new signing Donovan Pollock and goalscoring machine Jonathan Rideout grab a goal each, while Jackson Stephens nodded home his first of the season.

Adelaide United will look for their first points of the season after their loss 3-1 loss to Sturt Lions in Round One. Luka Jovanovic’s incredible solo run goal was a moment to savour for Adelaide United FC.

Adelaide United FC faces a real challenge in their trip to South Adelaide. Both clubs will be gear to secure as many points early in the season to assist in their season ambitions.