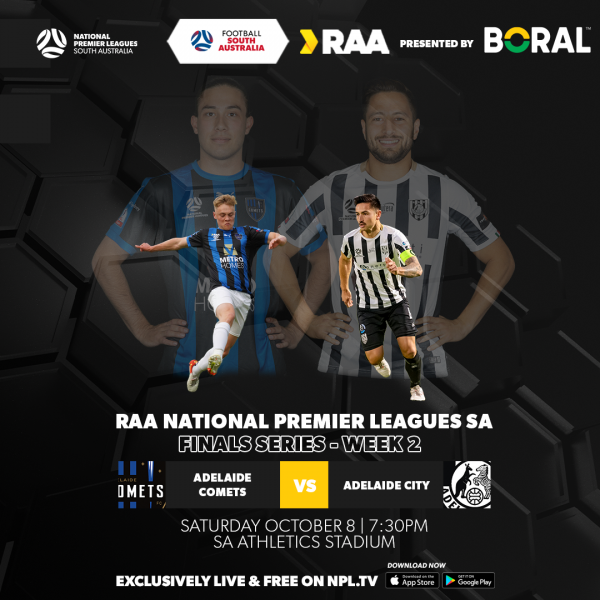 The Semi-Final is delicately poised after the first 90 minutes of action between Comets and City, with the minor premiers taking a slender lead into their home leg tonight at SA Athletics Stadium.

One goal was all it took to split the two sides, as Jayden LoBasso’s deep cross into the box found the onrushing Allan Welsh, who turned his first-time shot home underneath the keeper to hand Comets the win and a crucial advantage.

For the hosts, last week marked their sixth win in their last seven matches and increased their unbeaten streak to eight games, a run which saw them snatch top spot and leave them 90 minutes away from sealing their place in a third successive Grand Final.

The first leg triumph also meant that Comets’ dominance over their opponents throughout the 2021 season continues, with three of City’s four losses in both the minor round and finals coming in this very fixture.

City will be desperate to rebound from what was a lacklustre end to the season for one of the league’s dominant forces, with the Black and Whites’ winless run now stretching to four matches, their last win dating back over a month ago.

One of the big talking points from the first leg was the red card shown to Zakariah Waters, just four minutes before Comets broke through, so he’ll be unavailable to take his place in the reverse tonight.

Both sides will enter tonight’s Semi-Final that they can come out on top and book their place in the 2021 RAA NPL Grand Final, with a preliminary final against a hot Sturt or South outfit awaiting the loser. 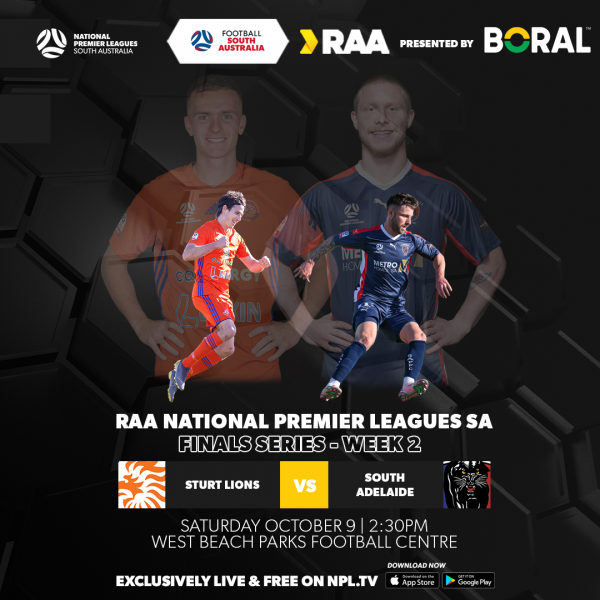 The second final of the weekend pits the two victors of last weekend’s elimination finals against one another, with the two promoted sides in Sturt and South facing off tomorrow afternoon.

Both sides have enjoyed impressive first seasons back in the top flight of South Australian football, but few would’ve expected to see both of them in the final four of the competition come October.

The hosts played out a 120-minute stalemate against MetroStars before prevailing in a thrilling penalty shoot-out in which Sturt gloveman James Klappers saved two crucial penalties and Gonzalo Rodriguez’s parried effort bounced back into the net behind the celebrating keeper.

It was a big statement from the Lions, who’ve flattered to deceive at points this year but held firm and ground out a clutch victory when it counted against quality opposition with their season on the line.

If Sturt’s statement was big, South’s was enormous as they swept Campbelltown aside in an emphatic 3-1 victory away from home to emphatically dump the reigning champions out of the finals at the first hurdle.

An early penalty from Alex Rideout and close range finishes by Jackson Stephens and Declan Gray earned a remarkable victory for South, who weren’t even in the top six at the start of the final round.

It’s a second consecutive cut-throat final for both of these sides, so each know that they’ll need to be ahead at the final whistle if they’re to progress and face off against Comets or City for a shot at making the Grand Final.