Campbelltown City registered their first win of the NPL season, coming from behind to secure a pulsating 4-2 victory over MetroStars.

The visitors drew first blood in the eighth minute as Alessio Melisi’s deflected cross fell into the path of Joshua Mori, who got boot to ball and tapped in from six yards.

Campbelltown found themselves back in the game just two minutes later, however, as Trey Williams curled his shot past the goalkeeper to halve the deficit.

Marc Marino brought them back on level terms in the 27th minute courtesy of a misplaced back pass, as he coolly slid his shot under the onrushing keeper to make it 2-2.

The home side’s comeback was completed on the half hour as Alex Mullen converted from the penalty spot after Marino appeared to be collected high in the 18-yard box. 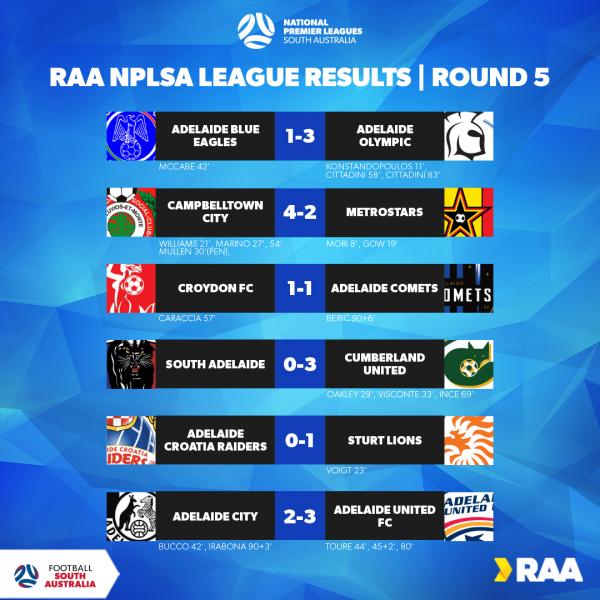 Campbelltown put the icing on the cake ten minutes after half-time after Luigi Ditroia’s cross beat everyone in the box, leaving Marino with an easy tap-in on the goal line to complete the scoring.

Adelaide United earned an impressive 3-2 win at Adelaide City, while Adelaide Olympic also won their first game of the year in a 3-1 victory over the winless Adelaide Blue Eagles.

Cumberland United and Sturt Lions claimed important away victories over South Adelaide and Adelaide Croatia Raiders, and Croydon Kings and Adelaide Comets shared the spoils in a 1-1 draw.