South Adelaide have rebounded from three successive NPL losses in style, defeating Adelaide Croatia Raiders 2-1 despite playing with ten men for over an hour.

After opening their season with comfortable wins over the Young Reds and Adelaide Olympic, defeats against MetroStars, Adelaide Comets and Cumberland United gave the Panthers a reality check.

It looked as though their streak would stretch to four when, in the 23rd minute, Jackson Stephens was shown a second yellow card for dragging down Harley Gepp near the halfway line.

However, it was South who drew first blood after Liam Wooding was fouled on the edge of the 18-yard box, allowing Alexander Rideout to convert from the spot and hand his side an unlikely lead just before half-time.

Raiders restored parity in the 57th minute, though, as substitute James Temelkovski rolled his left-footed shot across the keeper from a tight angle to make it 1-1.

South ended the contest in the 83rd minute when Jonathon Rideout ran onto a long-range through ball from Daniel Evans, beat two defenders and squeezed his shot past the onrushing keeper to hand the hosts a classic victory.

MetroStars edged Adelaide Blue Eagles 1-0, consigning them to a sixth consecutive defeat, while the spoils were shared between Olympic and Adelaide City as their match finished 1-1. 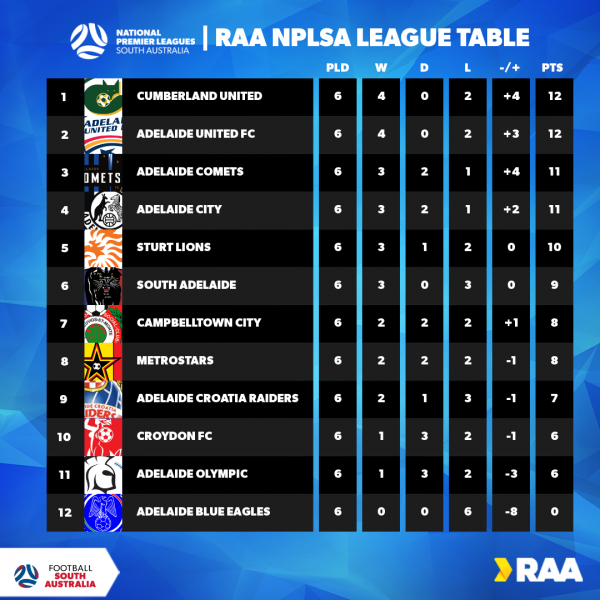