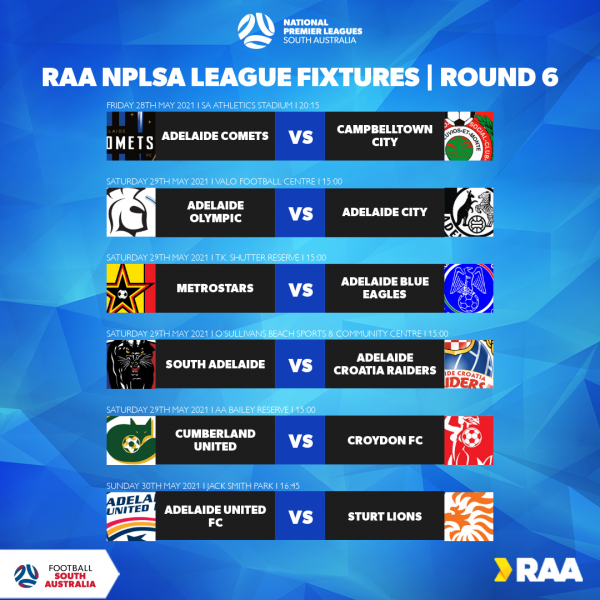 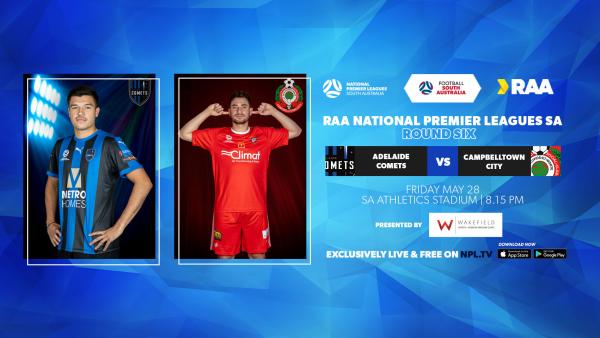 The blockbuster Grand Final rematch kicks off Round 6 of the NPL as Comets host Campbelltown in what promises to be an entertaining contest.

The home side were held last weekend by the Kings, but a Ninko Beric equaliser in the 96th minute sealed the most dramatic of draws to keep their unbeaten start to the season running into a sixth week.

Campbelltown’s winless run was finally broken last week as they produced a quality display to come from two goals down to overhaul MetroStars in a contest that finished 4-2.

The visitors have had the wood over Comets recently in big matches, with the last two Grand Finals ending in victory for the boys in red, but there are three points up for grabs that could go either way tonight.

Cumberland take on Croydon in a contest between sides who have experienced vastly different fortunes at both ends of the ground so far this season.

The home side bounced back from two straight losses with a big 3-0 win away from home over South which took their early season tally to three wins, the equal-most at this stage of the year.

A match that appeared to be heading in the direction of Croydon was cruelly snatched away by Comets at the death, consigning them to their third successive draw and leaving them with just one win.

Victory to Cumberland would see them claim another scalp and keep pace with the top sides, while a much-needed win for Croydon would be reward for effort that has eluded them over the past month.

South enter their contest with Raiders hoping to snap their losing streak, with the visitors unable to string together consistent results so far this season.

Three straight losses have followed South’s victories in the opening two rounds, and they will be disappointed to back up their narrow losses to strong sides Comets and MetroStars with a 3-0 home defeat to Cumberland.

Raiders, meanwhile, fell to a narrow 1-0 home loss against Sturt last weekend, leaving them with two wins and a draw from five games without any result being replicated in successive weeks.

Despite their relatively spotty form lines, both sides have shown themselves capable of matching it with great sides this season and will be keen to bank a crucial three points here.

MetroStars have the chance to rebound from their indifferent start to the season with victory tomorrow against bottom-of-the-table Blue Eagles, who themselves are in desperate need of points.

The home side will have been gutted to let a two-goal lead slip against a previously winless Campbelltown outfit, let alone to concede four unanswered goals, and now only sit above the drop zone on goal difference.

Blue Eagles have struggled so far this season to make things click with no points gathered and the most porous defence in the league with 12 goals conceded, ten of which have been shipped in their last three fixtures.

MetroStars must win to breathe life into their disappointing season thus far if they aim to challenge for higher honours, but there’s no side in more desperate need of a win now than Blue Eagles.

Olympic find themselves in the bottom two after five rounds and face another tough assignment in the form of City tomorrow afternoon.

It’s not all doom and gloom for Olympic, as they registered their first league win of 2021 in a 3-1 triumph over Blue Eagles to keep within a win of sixth-placed Raiders.

Conversely, City suffered their first loss of the league season last weekend as they were beaten on their home patch 3-2 by Adelaide United, although they retained their position in second thanks to results around them going their way.

City are rightly aiming for a title assault this year, so a win over Olympic will be firmly in their sights, but the hosts will be hoping to make it two wins in a row and rise further from the bottom two.

United and Sturt have been two of the surprise packets this season and go head-to-head in the late kick-off tomorrow at Jack Smith Park in search of victory.

After a disappointing start that yielded zero points and no goals, United’s run of wins extended to three with a 3-2 triumph over City to now bring their goal tally to nine for the season.

Sturt continued their smooth start to life in the top tier with a 1-0 win over Raiders, marking their third in five matches and leaving them just a solitary point off top-of-the-table Comets.

With both sides impressing in the early stages of the season, this contest shapes as an entertaining one between clubs aiming to entrench themselves in the top half as early as possible.