Croydon FC searches to make it four wins in a row as they face Adelaide Olympic Saturday afternoon at Jack Smith Park. After a difficult period of form which saw Croydon FC face seven losses between rounds nine and 16, the team are well and truly back to their best which saw them contend for the top spot at the beginning of the season. The last round marked their third consecutive victory as goals by Peter Mercurio, Adam Martinello and Patrick Caraccia provided Croydon FC with a 3-1 win over South Adelaide. Currently sitting in fifth, Croydon FC have a great opportunity to secure a place in the top six this season, however, must continue their winning ways as FK Beograd sit only one point behind in seventh.

Adelaide Olympic obtained their third win of the season when they met Croydon FC in Round Nine as former striker Fausto Erba’s 23rd-minute finish was enough to earn the three points.

Adelaide Olympic’s Round 19 clash was heartbreaking for the club. After what was a strong performance by the club against Campbelltown City, a 25th-minute Tzoi Tsarkani goal gave Adelaide Olympic the 1-0 lead which the team kept up until the 90th minute. Two injury-time goals by Campbelltown City saw Adelaide Olympic drop value points as they lost the match 2-1. That result has seen the team remain only three points above the relegation zone, meaning any point will be valuable for the team, especially with an important clash with fellow relegation battlers coming up next round.

Cumberland United’s second win of the season came against South Adelaide in their Round Nine clash, as heroics by Thomas Visser, Harry Thomas and Harry Thannhauser provided their side with a valuable lead. Goals by Liam Wooding and Jonathon Rideout for South Adelaide saw the game finish 4-2.

South Adelaide has struggled with form over the last month, with the team only recording one point in their last four games. This form has seen South Adelaide drop to ninth, as they sit only five points off the relegation zone. The team faced their tenth loss of the season last round as a Jonathon Rideout 62nd-minute finish was not enough to rescue any points for his side as they lost 3-1 to Croydon FC. A win for South Adelaide will see them stay clear of relegation and erase any worries of facing the drop in season 2022.

It’s the clash that could determine the top six race, as sixth-placed Adelaide United FC travels to Frank Mitchell Park to take on seventh-placed FK Beograd. FK Beograd will be devastated to have dropped out of the top six as they faced a 2-1 loss to Adelaide Comets, with Antonios Natsiopoulos’ tremendous solo effort in the seventh minute unable to secure any points for the club. Any point this round against Adelaide United FC will see FK Beograd jump back into the top six, with a win seeing them hold a three-point gap heading into the final two games of the season.

It was another attacking masterclass by Adelaide United FC in their last meeting with FK Beograd as the team secured a 5-2 victory. A Joshua Mori double was not enough for FK Beograd on the day as goals by Luka Jovanovic, Asad Kasumovic, Giuseppe Bovalina and Fabian Talladira led Adelaide United FC to victory.

Currently sitting level on points with FK Beograd, Adelaide United will look to obtain a three-point gap inside the top six as they search for a place in this season's Finals Series. It was another fantastic attacking performance by Adelaide United FC in Round 19 as a double by Asad Kasumovic and a goal by Musa Toure earned the team a 3-2 victory over MetroStars. Adelaide United FC has been in red hot form over the last month securing three wins in their last four matches with the team scoring 11 during this period, as they search to continue this great goalscoring record as they search to increase their goal difference.

Sturt Lion's search for a place in the top six is still on, however, the team must secure a win in their Round 20 matchup with league leaders Adelaide City. Sturt Lions obtained their first win since Round 13 as the team was led to victory by another fantastic Zack Gomez goal to beat Cumberland United 1-0, also marking the team’s first clean sheet of the season. A win is vital for Sturt Lions in Round 20 as the current eighth-placed team could find themselves out of Finals Series contention if they face defeat this round and either Adelaide United FC or FK Beograd record a victory.

Adelaide City eased to victory in their last meeting with Sturt Lions as goals by Ayom Ayom Majok, Aladin Irabona and the recently departed Kur Kur secured the 3-0 win.

After three games without a win, Adelaide City returned to the winner’s circle as goals by Ayom Ayom Majok and Nicholas Bucco led the team to a 2-0 victory over WT Birkalla. That victory saw Adelaide City remain at the top of the RAA NPLSA ladder for another week, with Adelaide Comets still level on points and Campbelltown City still sitting one point behind in third. After the team’s midweek victory over Logan Lightning FC in the Australia Cup Round of 32, Adelaide City will be in high spirits as they look to further extend their lead at the top of the league.

In what could be the biggest showdown of the season, Campbelltown City host Adelaide Comets at Steve Woodcock Sports Centre, with both teams looking to secure a place in the top two and potentially go top of the league. Campbelltown City continues to look dangerous each week, with the side securing their sixth consecutive victory last week as they beat Adelaide Olympic 2-1. After conceding early, Campbelltown City seemed like they could not find an answer in their attempts to beat Adelaide Olympic, however, their quality saw them push their opposition until the very last kick, with Antony Piscioneri and Jake Halliday both scoring in injury time to lead their team to a 2-1 win. That victory saw Campbelltown City remain one point off first place, with a win this round seeing them go two points clear of opponents Adelaide Comets in the top two.

On their own winning streak, Adelaide Comets have won all their last four games, including a valuable 2-1 victory over the top six hopefuls FK Beograd. After conceding within the opening seven minutes against FK Beograd, Adelaide Comets was eager to make their lead short with Thomas Briscoe scoring only a minute later, while Augustus Williams found the back of the net in the 61st minute to secure the victory. With the team looking to finally get the bragging rights over Campbelltown City, a win for Adelaide Comets to go four points clear of their opponents will be extremely valuable.

MetroStars look to secure their place within this season's Finals Series this week as they face WT Birkalla at TK Shutter Reserve. After what has been a strong season for MetroStars, the team has failed to record a point since their incredible win against the then undefeated Adelaide City. MetroStars’ losing streak increased to three last rounds as the team lost 3-2 against Adelaide United FC with goals from Ren Nagamatsu and Christian Esposito unable to secure any points for the team on the day. With the team now unable to secure a place amongst the top two, MetroStars will be hoping for a strong end to the season as they search to make a strong push for a run in this season's Finals Series.

Only one goal separated the two sides when they met last, with a 30th-minute goal by Ren Nagamatsu securing a 1-0 victory for MetroStars.

WT Birkalla has a difficult task in their attempts of surviving the drop this season, with the team needing results to go in their favour to remain in the RAA NPLSA for season 2023. After facing four consecutive defeats, including a 2-0 loss against Adelaide City last round, WT Birkalla remains at the bottom of the RAA NPLSA, four points away from safety. With only three games remaining, three points are must needed for WT Birkalla this round, as if the team loses and Adelaide Olympic are to win their respective fixture, it will mean that WT Birkalla will be the first team this season to face the drop. 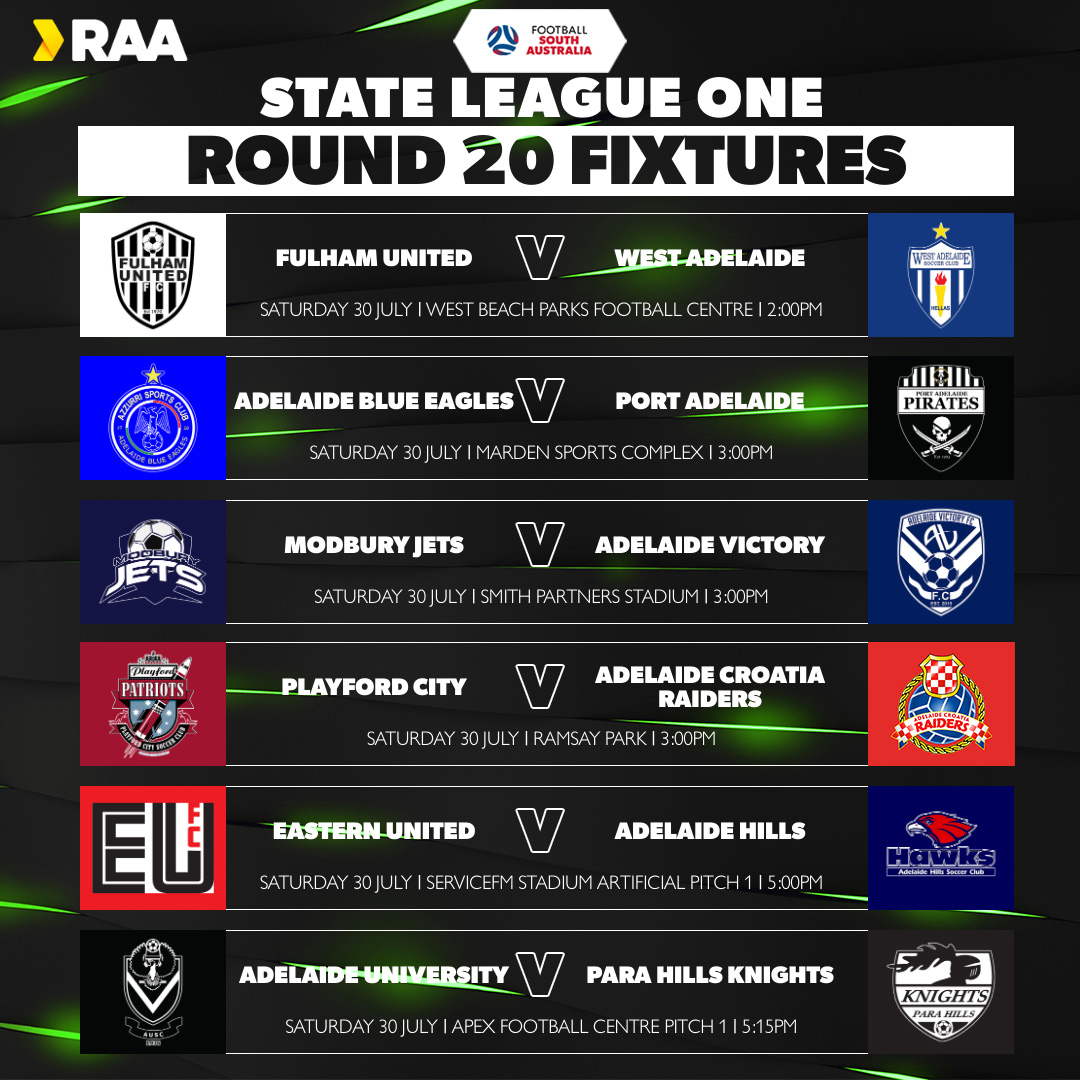 Modbury Jets look to secure the Premiership and promotion this weekend as three points will guarantee their return to the RAA NPLSA in season 2023. Modbury Jets continue to impress this season, with the team demonstrating their incredible attacking abilities on the national stage and within State League One. The team secured one of the biggest wins of the season last round as they dominated Port Adelaide in a 10-1 victory, that took them in touching distance of the Premiership. Adelaide Victory looks to spoil the party this week, with the team fresh off an important relegation battle win last week with Adelaide University as goals by Christopher Annicchiarico and Marko Bogdanovic secured the victory. The team's win last round saw them move five points clear from the relegation zone, with a win this round and an Adelaide University loss or draw will see Adelaide Victory survive the drop from State League One. There is a lot of play for this round for Modbury Jets and Adelaide Victory.

We are also treated to an exciting top-six clash at West Beach Parks Football Centre as Fulham United FC host West Adelaide. Currently sitting in sixth, Fulham United FC has only one point separating themselves and eighth, with three points needed in their ambitions for Final’s football. The team has been in great form recently, which has seen the remain undefeated in their last seven, including an impressive 3-2 win over Adelaide Croatia Raiders. They face a difficult challenge as they face West Adelaide who is eager to put the pressure on Modbury Jets for another week while securing their place in the league's top two. It’s been a difficult couple of weeks for West Adelaide as they have been unable to secure any wins in their last three fixtures, drawing all three including a 1-1 draw last week with Eastern United. Although a Modbury Jets win this week will see them win the Premiership, West Adelaide is still eager to confirm that place in the top two as they search for a good run in the Finals Series in their search for promotion. 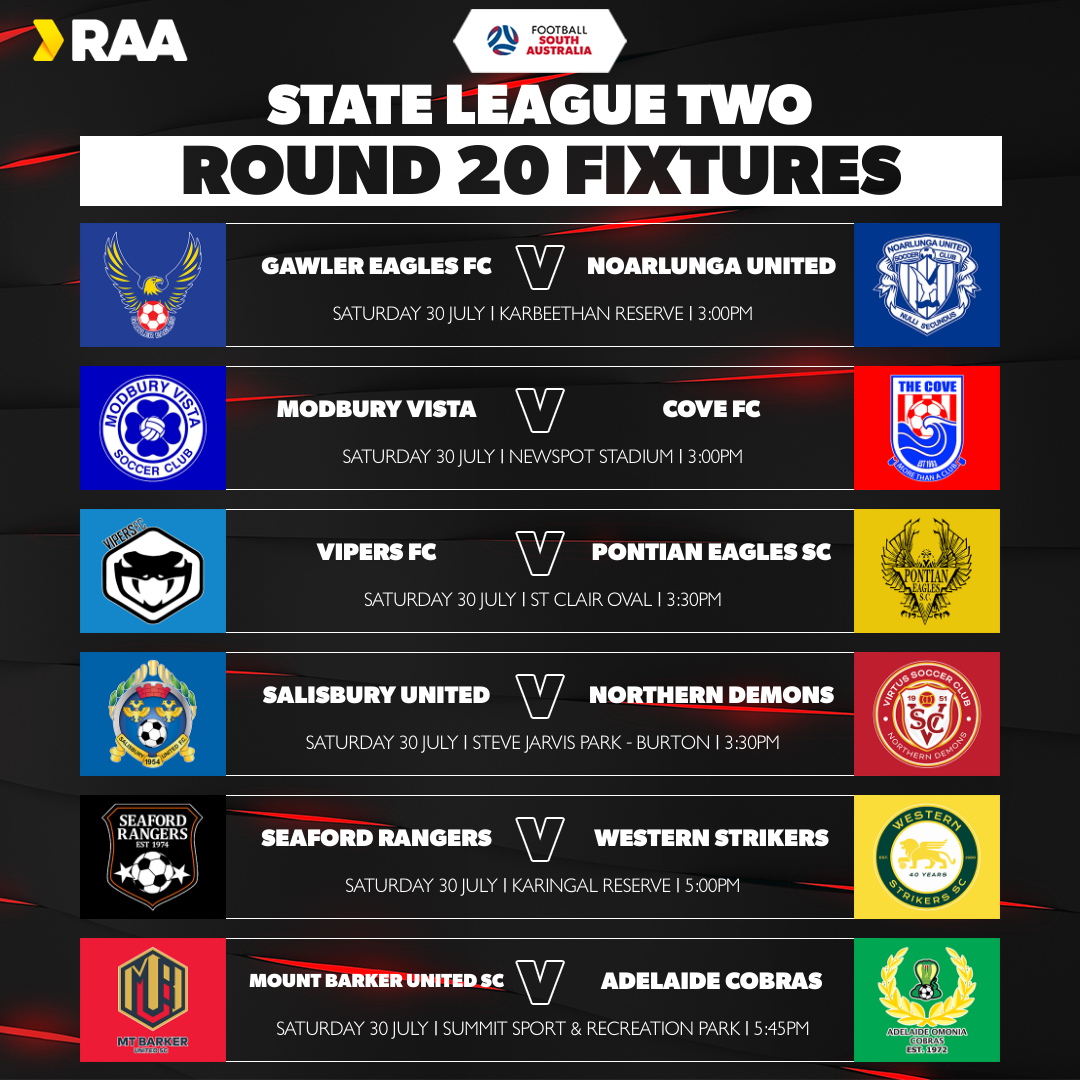