Football South Australia, in partnership with Bendigo Bank, established the Bendigo Bank Community Awards Program to recognise the valued contribution of volunteers, coaches, referees and clubs to the sport of football in South Australia. On Friday William Heinrich, a member of the Football SA Referee Academy Development Squad, was announced as the July winner of the award.

William has shown dedication to improve his officiating, while his passion and drive make him a perfect role model for fellow referees. William has received multiple endorsements from the football community for his performance over the past month, highlighting the respect he shows to players, coaches and spectators. 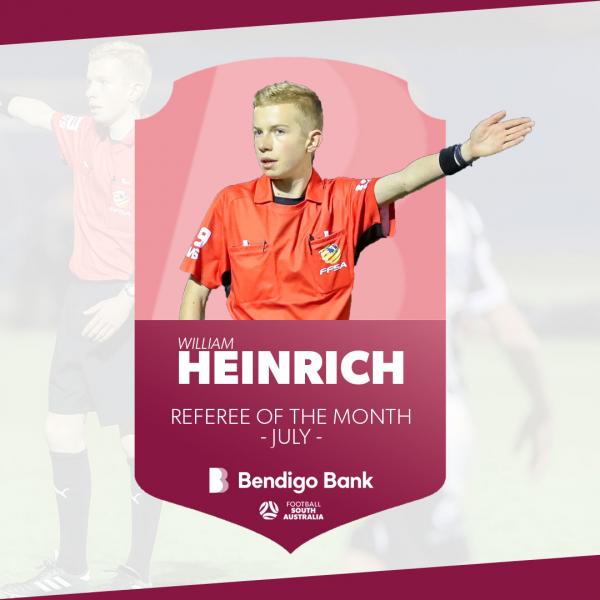 Football SA Match Official Nathan Magill was appointed by Football Federation Australia as the Referee Coach for the 2020 Hyundai A-League Grand Final, played on Sunday at Bankwest Stadium. Due to COVID-19 travel restrictions, Nathan was appointed to coach from South Australia via TV.

Nathan was part of the team headed up by Chris Beath, who saw Sydney FC defeat Melbourne City after extra time to win the title. Beath was joined by Assistant Referees Scott Edeling & Kearney Robinson, Alex King as the Fourth Official, Ryan Gallagher as Fifth Official and Kris Griffiths-Jones as the Video Assistant Referee.

Experienced Football SA assessors John Tarling and Herb Clark have announced their retirement. John informed Football SA he was hanging up the pen and notebook in August, after 44 years’ service coaching referees.

John joins long-time colleague Herb Clark in retirement. Herb retired from active assessing earlier this season, after 49 years involved with refereeing. In addition to coaching and assessing match officials, he has been a distinguished leader of the Soccer SA Referees Branch, having first joined the Branch in 1971.

We acknowledge and thank John and Herb for their distinguished service to Football SA refereeing over the past half a century, and wish them all the best in their retirement.

Congratulations to the following match officials who reached Referee Milestones during the past month: