How last weekend panned out... 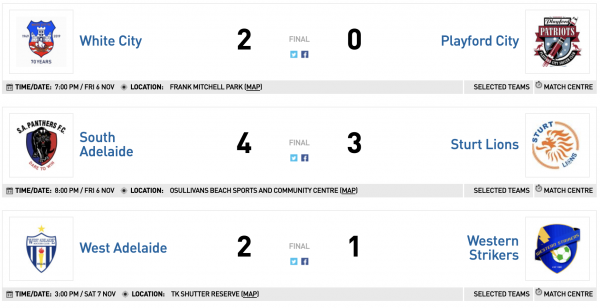 White City are through to the next round after a stellar home performance, overcoming a tough opponent in Playford, 2-0. H. Gepp got Beograd up and running with a well-taken penalty in the 31st, which was supplemented by a K. Phelps goal in the 74th.

Playford have had an impressive season and will be looking to go one step further in next year’s campaign. White City have a tough week ahead, with West Adelaide away.

We expected something special from two of the league’s best, but South Adelaide’s 4-3 win over Sturt will be talked about for quite some time. As the preview predicted, Gonzalo Rodriguez got on the scoresheet. Against any other opponent, one would assume Rodriguez’s brace would be enough to secure the victory; but Panthers, or Rideout to be exact, are not any other opponent.

The State League’s most formidable goal scorer helped himself to a casual four golazos, what an absolute phenomenon. He, his team, and his golden boot face Sturt once again, this time away from home.

Western Strikers turbulent season comes to an end, as the might of West Adelaide was just too much. Hellas ran away with it late, securing a massive 2-1 win.

It all looked so good for Strikers, as J. Tripodi’s 29th-minute strike remained unanswered until the final eleven minutes. Yasmin Sudic scored the crucial equaliser, and that man N. Stefanopoulos banged the winner in the 85th.

Hellas have White City this week in what will be a cracker, a true attacking masterclass. 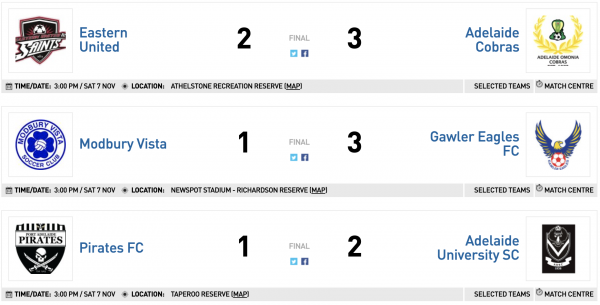 Cobras stocks continue to rise. After stealing the minor premiership from under Eastern’s noses, they’ve gone on to win the first leg of the finals 3-2. Away from home, Steven Savino and Anthony Francesca were combining well, with Savino scoring a brace.

Acton and Blazeka were on target for Eastern, but it sadly was not enough. Eastern still have a chance at redemption and will need to step up and prove their worth in the reverse fixture.

Adelaide Uni secured probably the biggest win in the club’s short Federation history. A goal down against Pirates, young-gun Taylor Martin took matters into his own hands, scoring a 6-minute brace late on in the game to secure a famous 2-1 win.

Uni will come up against Gawler at University Ovals.

Vista and Gawler did not disappoint, as the Eagles got the better of their Northern counterparts, winning 3-1. Gawler looked in control the entire game, with Iradi Baragomwa scoring in the 20th, and then talisman Benny Kovadio scoring in the 46th and 93rd.

This week, we witness yet another instalment of the enthralling season-long saga; Sturt versus South Adelaide. Panthers have had the wood over Lions recently and go into this battle a goal ahead.

Sturt will consider this the slenderest of margins and will inevitably back themselves to turn this fixture around and make a run at promotion, and of course the title. South Adelaide and their main man Rideout will be chomping at the bit to make this a faultless season.

At the start of this season, it would have come as no surprise to anyone if you said these two sides would be in a quarter-final. West Adelaide take on White City, and Hellas in recent weeks appear to have exercised their demons so to speak and have been gaining serious momentum

Beograd themselves are on the front foot, having just overcome an emphatic Playford side. This game will be electric, with both sides possessing the attacking prowess to make this a real spectacle for the fans.

Cobras got the better of Eastern this week, so United will once again be on the park with a point to prove. Confidence will be high for the home side, with a title in their cabinet and a win under their belt.

Eastern will have to pull their best tricks out of the bag, but they are more than capable with the talent within their ranks.

Both Adelaide Uni and Gawler will be on a high after both overcoming a side that finished higher on the table. Uni are in red hot form and will hold the home advantage, with their youngsters surely eager to impress once again.

You cannot count Gawler out though, they’ve been brilliant in the last couple weeks and on their day, can get a result against anyone.