The State League One Preview | Round Eight 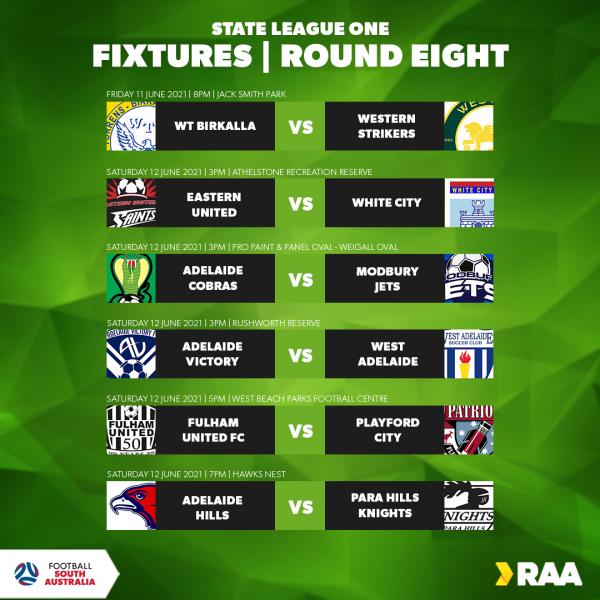 Having only just recovered from last week’s scintillating action, another round of state league football is upon us. This week’s fixture list pits several of 2021’s strugglers against those who have found some success early on. The action will be kicked off by two sides in opposing form, Birkalla and Western Strikers are set to battle it out at Jack Smith in an important top six contest.

Birkalla have put 2020 in their rear-view mirror and have come into this campaign showing their NPL credentials, earning themselves 2nd place. This week they test themselves against a strong Western Strikers side on paper, but whose strength appears to be dependent on form at the moment, they sit in 6th, coming off two disappointing 3-0 losses to White City and Eastern United respectively.

This result could further exacerbate Strikers’ woes, or it could catapult them back up into 2nd spot if things go their way. A Birkalla win will see them mount pressure on White City – they go into this affair as favourites.

Eastern United will be hoping Round 7’s 3-0 statement against Strikers will be the spark that lights the fire of a strong state league campaign. They’ve shown glimpses this season but just haven’t brought the consistency that is necessary to go far in this league (so far). They face a herculean task in White City, who have been the strongest side in the competition.

White City will be more than aware that Birks are nipping at their heels and will back themselves to overcome Eastern. In doing so, they would maintain some daylight between themselves and their rivals. Eastern will feel positive after last week’s result, and if they do manage to pull off a miraculous win against the league leaders – would find themselves well-clear of the relegation zone.

Cobras have not found their form at all, up until last week’s result against West Adelaide. The win showed that they have what it takes to win games in this league, but they’ll need to dig a lot deeper and show a lot more if they are to avoid going straight back down.

Jets have shown their intent to go straight back to the big time and are coming off two impressive wins against Eastern and Birks. If they carry this form into this fixture, they should get the job done and keep themselves in the top three.

Victory sit in 5th at the moment and are coming off a tough loss to Playford, a game where they probably feel they could’ve got more from. West Adelaide sit in 8th and would be very disappointed with their current predicament.

With the squad they have, Hellas should be making this league their own. Alas, results haven’t gone their way and a 2-0 home loss to a Cobras side rooted to the bottom of the table shows just how much they’re struggling. This weekend is an opportunity to make things right and set themselves onto the right path. However, this young Victory side are always up for the fight and won’t make it easy for their opponents.

Fulham vs Playford, 11th vs 4th. Fulham have been getting dismantled week in week out and are in serious danger of falling away from contention. All is not lost, but they certainly need to get out of first gear and begin to build some momentum.

Playford on the other hand have shown real quality this year and are looking like a side poised to go one step further than last year – which was an impressive campaign in itself. They just saw off Victory at home, playing some excellent football along the way. They will consider themselves heavy favourites for the three points here, and such an achievement could land them within one point of top spot.

Hawks have been soaring as of late and are always strong at the Nest. They’ve climbed up to 7th and will be looking to make Para Hills their next casualty in their quest for top six. Para Hills are yet another side who only turn up some weeks, sitting in 9th currently.