The State League Preview | Round Thirteen

Round 13 Preview By Fin Dunford 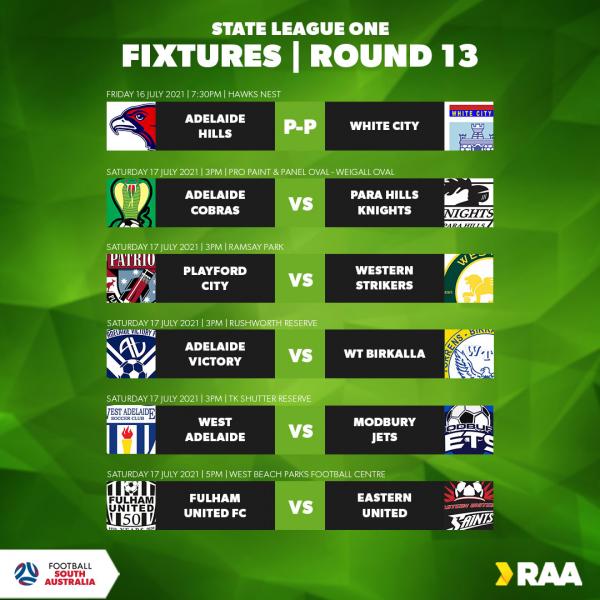 Cobras are in struggle-town and have another tough fixture ahead of them in Para Hills, who are in an impressive run of form. Cobras sit in 12th and are in dire straits, they simply must turn the ship around immediately – if they wish to not go straight back down to State League Two. Para Hills are coming off a win over West Adelaide and are continually turning heads with the results they are getting – they come into this fixture in 5th.

Playford showed grit and determination to come from behind twice against 2nd placed Modbury Jets on the weekend. They’ll seek to take that momentum into this week’s 4th v 6th fixture against Western Strikers. Strikers themselves are coming off a 2-2 draw with Hawks and will be looking to bounce back and affirm their position in the six.

Adelaide Victory are coming off a draw to Eastern United, continuing their winless streak which now stands at four games. Despite this they still sit in 7th place, equal on points with Strikers – but have a tough week ahead in Birkalla. Birkalla’s form is a different narrative, only losing one of their last five – this form lands them in 3rd.

West Adelaide cannot catch a break at the moment, they have a tough journey ahead of them to avoid relegation and yield some positives from this season. The next step of this journey is one of the toughest available, as they play 2nd placed Modbury Jets. Jets are coming off a draw to Playford, as they gave up a 2-1 lead in the 95th – this will inevitably have them chomping at the bit to make up for this, which is bad news for Hellas.

Both Fulham and Eastern United have a chance this week to distance themselves from the bottom of the table. The winner will acquire some much-needed breathing room from the relegation spots, whereas the loser will unfortunately be placed right in the thick of a relegation battle. Fulham have a slight edge at the moment, as they sit in 9th. Eastern sit in 11th but will inevitably back themselves to beat Fulham and leapfrog them into 9th. 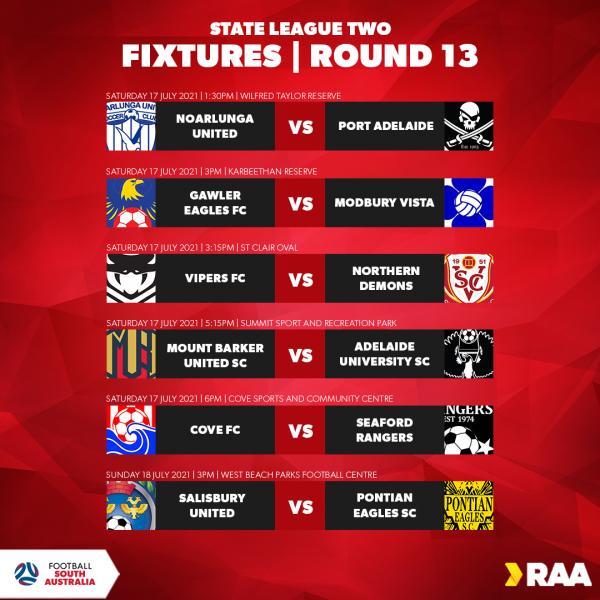 Noarlunga’s disappointing loss to Seaford has seen them fall down to 6th place. Pirates are also coming off a bitter loss, so both teams will be fired up and ready to climb back up the table.

Gawler were too strong for Mt Barker, and have another test against another struggling team in Modbury Vista. Gawler are currently sitting in 5th compared to Vista in 11th, a win for the home side could see them climb as high as 3rd.

Vipers play host to Northern Demons this week in a 3rd versus 10th clash. Vipers have won three of their last four and in doing so have climbed the ladder considerably, they’re now only one win away from Pirates in 2nd. Demons are coming off a positive result as they drew 0-0 with fourth-placed Salisbury and will be hoping they can once again take points off a top six side.

Mt Barker have it all to do this week, as they come up against 1st placed Adelaide Uni. Uni are in red-hot form, most recently knocking off Pirates in a top of the table clash.

Both Cove and Seaford are coming off big wins and come into this next Southern derby in 7th and 9th respectively. Cove overcame Pontian away from home, and Seaford were 3-2 winners over Noarlunga.

Salisbury will be disappointed with their 0-0 draw with Demons, as they look to make amend against 8th placed Pontian this weekend. Sitting in 4th currently, a Salisbury win could see them leapfrog Vipers into 3rd.