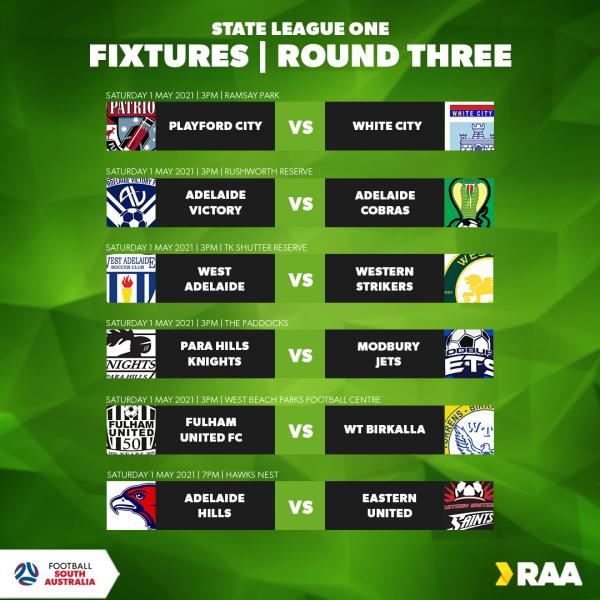 The high-flying Western Strikers will meet West Adelaide in Round Three of their State League One campaign this Saturday, 3:00 pm, at TK Shutter Reserve. Strikers enter the clash full of confidence, coming off the back of a 2-1 close win over Playford City in Round Two. West Adelaide, meanwhile, are looking to turn the tides on their season after a shock 4-2 FFA Cup loss to Port Adelaide last weekend. The blue and whites will be needing to find their form in front of goal if they seek all three points, with them only finding the back of the net once in the last two rounds. Both sides will be vying for a win, with the three points setting them up for a top-six push— and possible promotion—this season.

Other clashes in State League One this weekend include top of the table White City’s venture to Playford, Adelaide Victory’s battle with new-boys Cobras, the northern clash between Para Hills and Modbury Jets, Fulham United’s battle of the west against the inconsistent Birkalla, and the point-starved Adelaide Hills vs Eastern United contest. As the season is in its juvenility, each point is crucial in ensuring teams set themselves up for either a finals push or relegation survival, aligning with their 2021 ambitions. 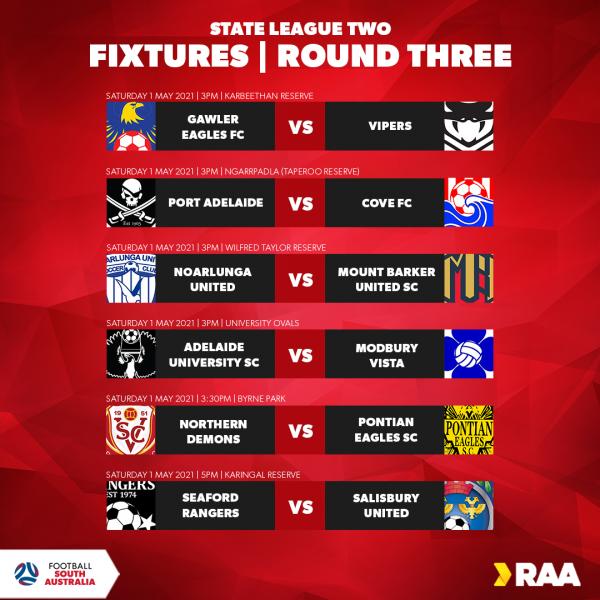 Undefeated sides Gawler and Vipers will battle it out this weekend for all three points, as both sides look to springboard themselves higher up the table, continuing pressure on the in-form Port Adelaide. The game is expected to be a high scoring affair, with 15 goals between them after the first two rounds. Vipers hopes of a win rely on their ability to stop the attacking threat of the third and fourth highest goal scorers in the league, Ousmanou Mohamadou and Aaron Taye, a challenge to do with the joint-worst defensive record in the top six so far.

As Port Adelaide travel to the winless Cove this weekend, both sides will be looking for a win to keep themselves within touching distance of the Pirates—who remain insurmountable—with a 100 per cent win record in all competitions. The Eagles will have the backing of the home crowd when they meet Vipers at Karbeethan Reserve, 3:00 pm.

Other games in State League Two across the weekend is Adelaide University’s test against the undefeated Modbury Vista—who enter Round Three with two draws—the winless Mount Barker’s venture against Noarlunga United, the northern clash between the Northern Demons and undefeated Pontian Eagles, and the north vs south battle between Seaford Rangers and Salisbury United, Saturday evening.