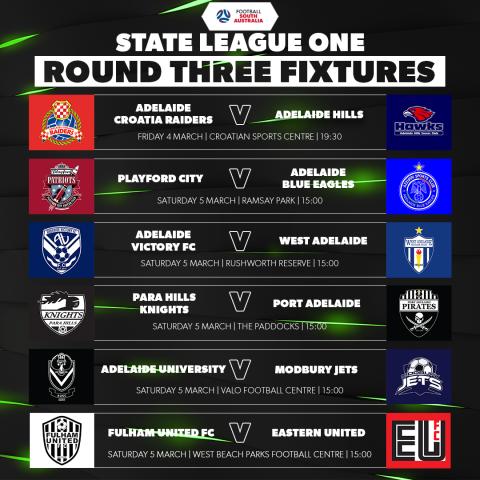 Friday night football continues in Round Three as Adelaide Croatia Raiders look to secure their first three points of the season as they host Adelaide Hills at Croatian Sports Centre. The start to Phil Stubbins’s tenure as Adelaide Croatia Raiders coach has not started well, as they enter Round Three with only one point. After recording a draw in Round One and experiencing a 4-2 loss to West Adelaide in Round Two, Raiders will be hoping for a change of fortune this round. Raiders star Omari Didero showed his class against West Adelaide, recording two goals in his team’s loss last weekend. They take on a fierce Adelaide Hills team who have started the season in great spirits. Adelaide Hills enters Round Three on the back of a 1-0 defeat against Para Hills Knights, however, will look to utilise the attacking prowess of striker Oliver Grant to secure a win over a defence that conceded four in their last match.

Adelaide Blue Eagles travel to Ramsay Park as they face Playford City Saturday afternoon. Adelaide Blue Eagles will look to continue their unbeaten start to the 2022 season, as they aim to better their goalless draw in Round Two. They face a Playford City side that a hungry to redeem themselves after their 5-0 loss to Modbury Jets last Friday night. After the devastation of last week’s defeat, Playford City will attempt to show why they’re still a team to fear this State League One season. In other State League One action Modbury Jets will travel to Valo Football Centre to take on Adelaide University SC. Modbury Jets will look to continue their outstanding start to the 2022 season after recording a 5-0 win over a strong Playford City. Modbury Jets enters Round Three after scoring nine goals in only two goals and will face an Adelaide University team that has failed to score in their first two fixtures. 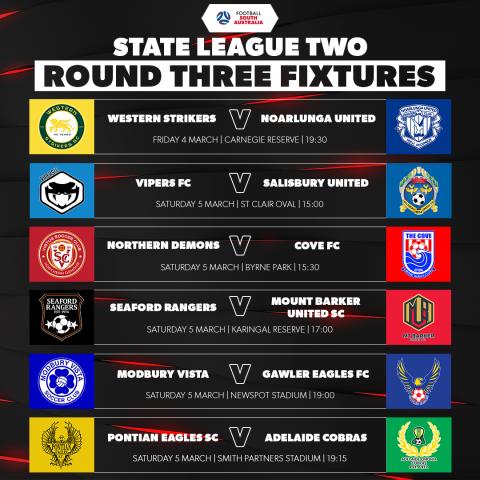 State League Two gets underway tonight as Noarlunga United travels to Carnegie Reserve to take on Western Strikers. Noarlunga United will look to pick up their first win of the season after recording two draws, with a 3-3 draw with Pontian Eagles SC being their most recent. Cameron Gardener will aim to replicate his two-goal output that secured his team a point at the climax of last week’s match, as he aims to lead his team to their first three points of the season. While Western Strikers will look to rebound after their 4-2 loss with Cove FC in Round Two. Giorgio Karakitsios double was not enough to rescue a point for Western Strikers in Round Two, however, he will look to lead the team to victory in Round Three.

Mount Barker United SC will look to continue their run at the top of the State League Two ladder as they travel to Karingal Reserve to battle Seaford Rangers. In their first two games, Mount Barker has scored nine goals as they recorded back-to-back wins, with the most recent coming against Modbury Vista in a 3-0 victory. After starting the season with a loss and a draw, Seaford Rangers search for their first win for the season. Pontian Eagles SC look to end Adelaide Cobras’ unbeaten run as they face in Saturday night football. Adelaide Cobras are yet to concede this season; however, this could be the end of their run as they face an exciting attacking side with Anthony Dimas, who already has five goals, leading the line for Pontian Eagles SC.

All State League One matches are live and free on NPL.TV, Powered by Cluch.