Playford and Para Hills lead the winners list, Vipers fight back from two down to go 2nd | State League Round 13 Review 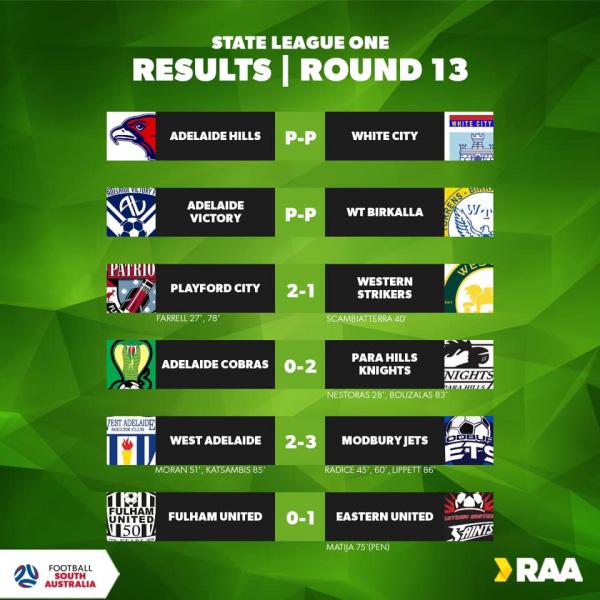 Despite two games having to be postponed, there was still plenty of state league action across Adelaide. There were some big wins in both leagues that created some movement on the table, here is how it all played out.

Para Hills are on quite a run, winning five of their last six games – this run expectedly continued against bottom-of-the-table Cobras. Nestoras got the Knights up and running in the 28th, with Bouzalas sealing the deal in the 83rd. With this result, Para Hills continue their climb, they sit in 3rd.

Playford secured a massive Victory over Western Strikers, with Strikers below them in 6th; the 2-1 win gives the Patriots a six-point buffer. It was that man Josh Farrell once again, who scored a brace with goals in the 27th and 78th – his efforts have him as the league’s top goalscorer with 11. This result sees Playford hold onto fifth place.

West Adelaide are officially in the relegation zone. The 3-2 home loss continues their poor run of results, but Hellas will feel unlucky that they didn’t come away with more. Radice put Jets into the ascendency with a brace which included goals in the 45th and 60th. West Adelaide stayed in the fight with a 50th minute Moran strike, and in the 85th minute – it looked as if Katsambis’ equaliser had stolen a valuable point. Alas, Lippet had other ideas and broke Hellas’ hearts just a minute later with a header from a set-piece. Jets hold onto 2nd with this result.

Eastern’s 1-0 win over Fulham is absolutely huge for them, they now leapfrog both Fulham and West Adelaide into 9th position. The goal was scored by Matija in the 75th, who is now up to five goals for the season. 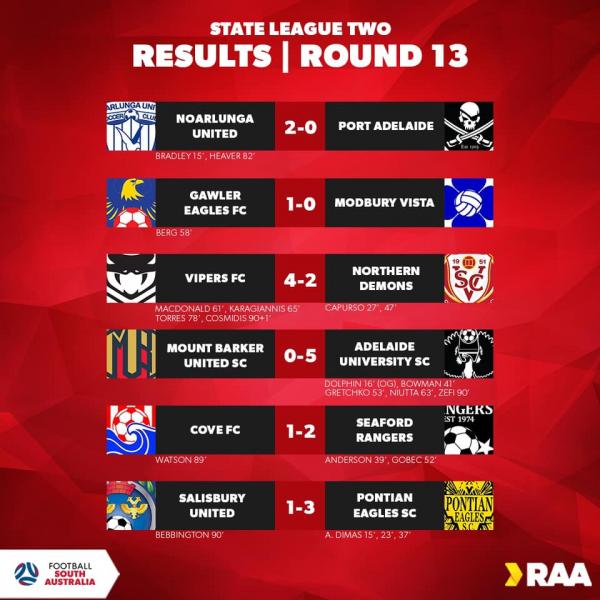 Port Adelaide slumped to a second-successive loss and in doing so, slide down to 3rd. Noarlunga were just too good on the day, with goals from Bradley and Heaver – the 2-0 win keeps United in 6th.

Gawler move up to 4th with a narrow 1-0 victory over Modbury Vista. Berg was on again, scoring his eleventh goal of the season.

Vipers are now in second as they came from two goals down to beat Northern Demons 4-2. Vipers are equal on points with Pirates but are ahead on goal difference.

Mt Barker were beaten 5-0 by league-leaders Adelaide Uni. The 5-0 drumming was a good work-out for Uni, who are now six points clear on top of the pile.

Cove could not make it back-to-back whereas Seaford could, coming away 2-1 winners. This win signifies a return to form for the Rangers, who now sit in 8th just two points off top six.

A first-half hat-trick for Pontian gun Anthony Dimas was the difference as Salisbury were downed 3-1 by the Eagles. This individual effort by Dimas extends his lead as the league’s top goal scorer, he is currently sitting on twenty