The Round Eight State League Wrap

Middle of the table shake up | State League One

Whilst the top three teams continued their impressive form; some mid-table clashes left some teams wondering, and others a much-needed flicker of momentum. As is ever the case, the unpredictable nature of the state league was at its mercurial best this weekend.

Bordering on a formality, West Adelaide were once headlining the winners circle, storming past Hills Hawks whilst never really leaving second-gear. Goals to Kasumovic and Lesi assured their place at the top and maintained a four-point gap between them and Sturt.

In what some are deeming the game of the round, certainly the upset of the round; Victory rolled Vipers 6-2 in a rampant away display. These are priceless points for the youthful outfit, who were invigorated by an untouchable Dom Talladirra who banged a three-minute hattrick. Talladirra’s heroics were a personal as well as a collective statement; cementing him as one of the league’s best playmakers, and perhaps Victory as a top-six contender.

White City were too strong in the second half for Western Strikers. A goal apiece at the interval, Strikers looked as if they could steal something from the game. However, three unanswered second-half goals, including another two from the in-form Steven Simic made sure the points went to the home side. This result sees White city slide into 5th, and Strikers drop outside the six.

Sturt and their talisman Gonzalo Rodriguez ran riot once again. Piling more misery upon the lacklustre Seaford team, Sturt ran away 5-0 winners. This leaves them in 2nd place, four points behind Hellas. Seaford who have now lost four on the bounce, find themselves rooted to the bottom of the table; and will need to make drastic changes if they are to avoid relegation.

Birkalla were able to quash a poor run of form by beating fellow top six contender Fulham 2-1, courtesy of a Calvin Mbarga brace. This result sees the Eagles slot back into finals contention, perhaps sparking a much-needed run of form if they wish to stay there.

Playford were involved in another nail biter, sneaking over Panthers 1-0 at Ramsay Park. Daniel Ryan was once again involved and had ice in his veins to put away a penalty in the 83rd minute. A massive statement to anyone doubting their promotion credentials. 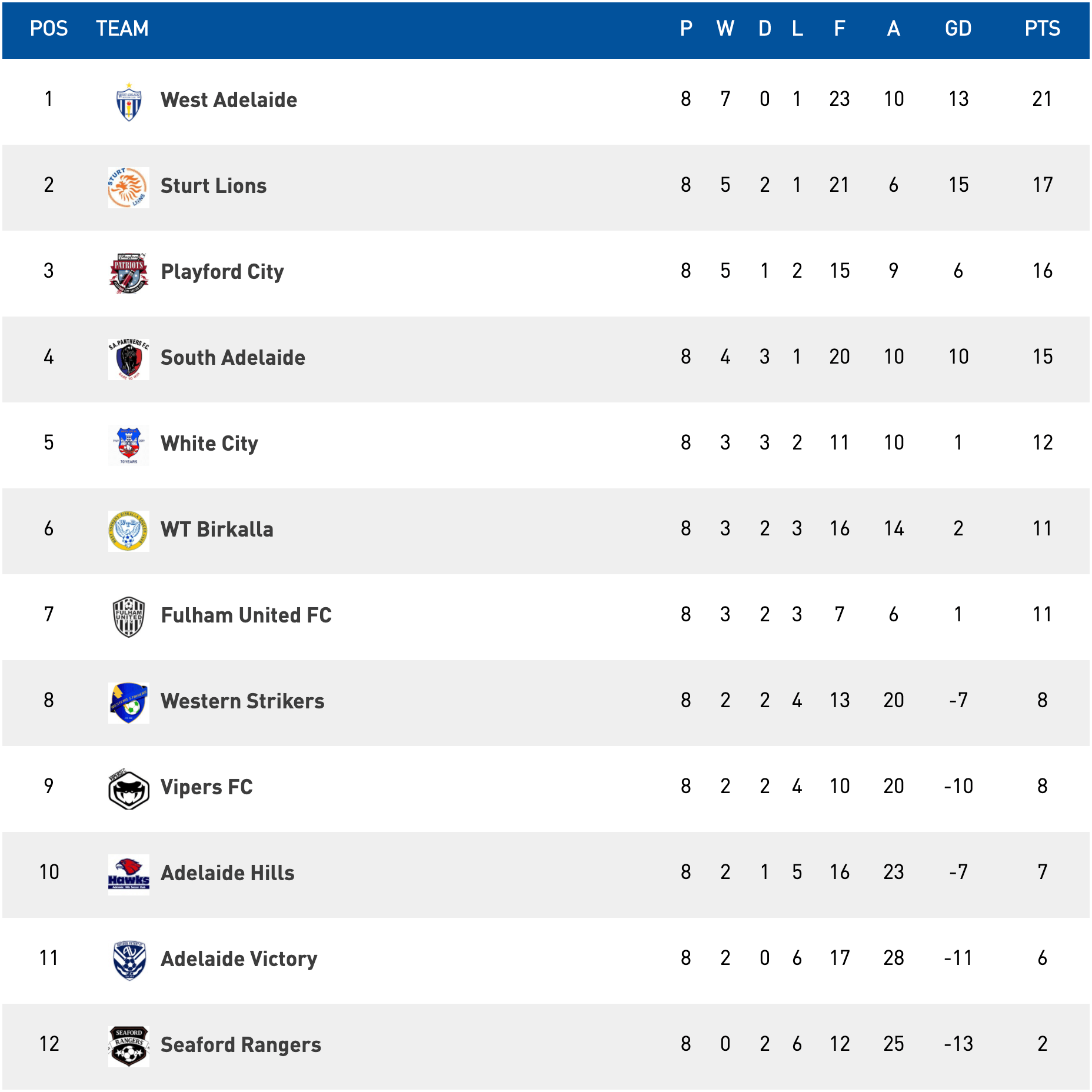 In what was teed up as a potential top of the table thriller, Gawler and Vista shared the points in a 0-0 stalemate. The bout showcased the defensive vigour of both sides, and indeed why they’ve both been so hard to break down. Nonetheless both teams will see this as an opportunity lost.

Mt Barker’s horror run continues, slumping to 8 losses from 8 games with a 0-2 loss to Northern Demons at Cornerstone. To rub salt in the wounds, the other two prospective wooden spoon teams both managed to grab wins.

Cove stuttered once again, as Cobras travelled down south and came away with a hard-fought 1-0 win through Steven Sevino. This sees the Cobras land themselves 3rd spot, and Cove down to 7th.

Adelaide Uni shared the points with Noarlunga in an exciting 2-2 draw, claiming game of the round. Uni will be disappointed not to come away with the three points, as this would’ve left them in the hotseat for a final’s appearance, and one game away from top spot.

Salisbury beat Pontian Eagles 2-1 in the newly formed Northern derby. Pontian went 1-0 and looked set to continue their promising start to the season, however Salisbury showed their experience in this league and pulled it back through Trimper and Bebbington. Both teams will be looking to build on recent performances, with must win clashes upon both clubs for Round 20.

Last but certainly not least, promotion contenders Pirates and Eastern United could not be separated with a fiery 1-1 draw. Five yellows and one red showcase just how much it means to both clubs. A point will seem like a bitter pill to swallow for Eastern, who had the opportunity to leapfrog Gawler. 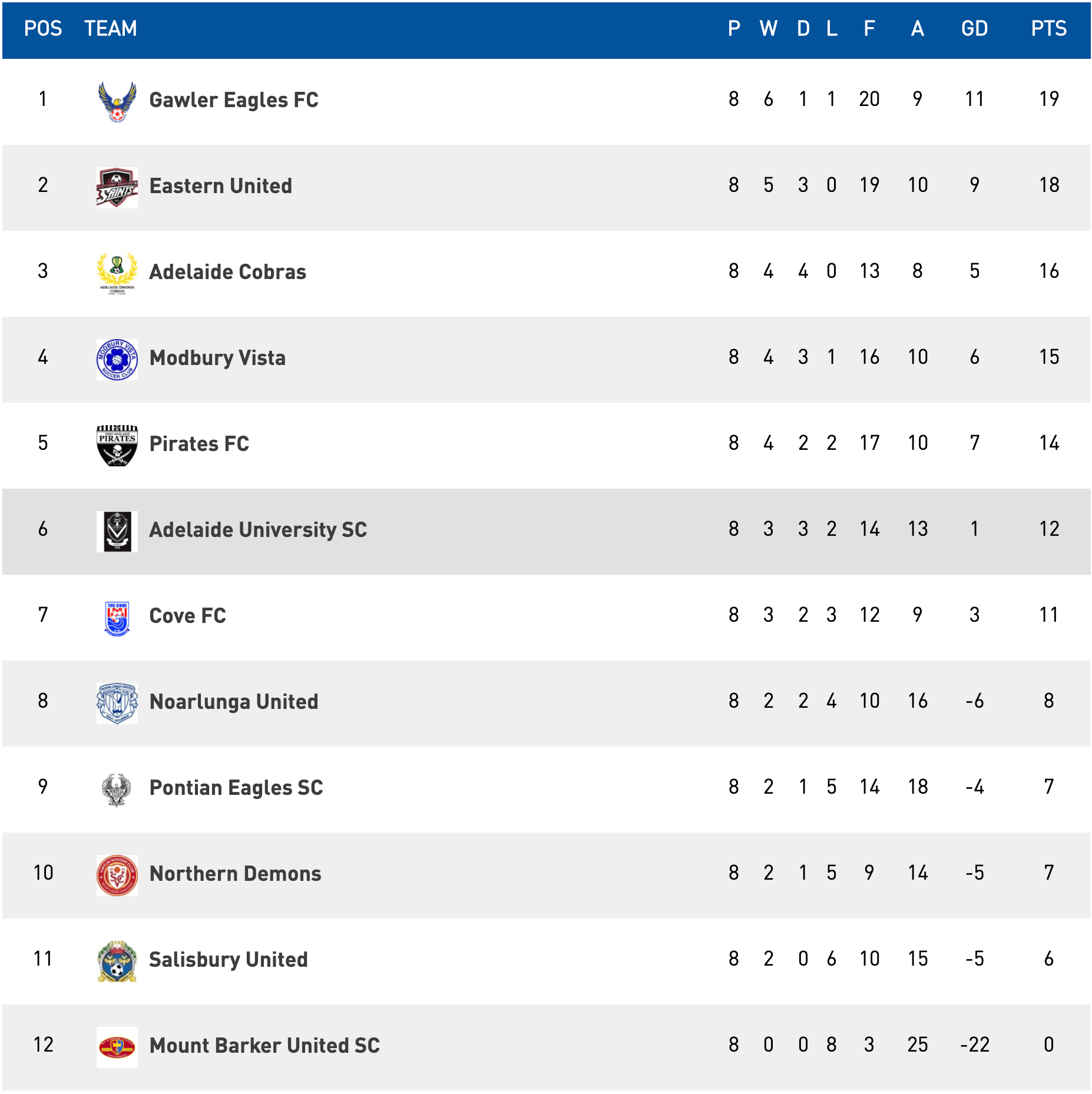