West Adelaide, Sturt and Playford all secure big wins to gain control at the top of the State League One table.

Round 18 saw West Adelaide continue their quest for the State League title, and of course automatic promotion. The 6-2 win included braces from both Kosta Mantis and Yasmin Sudic respectively, fortifying Hellas' place at the top of the pile. It also showcased some promising signs for the new-look Adelaide Victory team.

Sturt staked their claim as a genuine promotion contender once again, by seeing off Vipers 4-1 at home. Gonzalo Rodriguez inspiring the side to the win with a well-taken hat-trick, which sees Sturt earn 3rd spot and Vipers fall away to 8th.

Playford left it incredibly late to sneak over Seaford. The two sides were seemingly destined to share the points until Daniel Ryan took matters into his own hands and secured the win for the Northerners; who now sit in 4th leading up to next week’s six-pointer against South Adelaide.

The two Southern-based State League juggernauts Birkalla and South Adelaide were involved in a 0-0 stalemate. Birkalla have been unable to secure a win since the restart and will be looking to make things right next week against Fulham if they wish to climb the table and cement themselves as promotion contenders.

Rounding up the State League One action was a 4-3 thriller from Hills and Western Strikers. Hawks playmaker Dan Hosking continued his fine goalscoring form and put his side 1-0 up from the penalty spot, rendering him the league’s top goal scorer on eight goals. The game witnessed many ebbs and flows, although ultimately Strikers were able to snatch the points in the 90th minute through Linus Johnston. 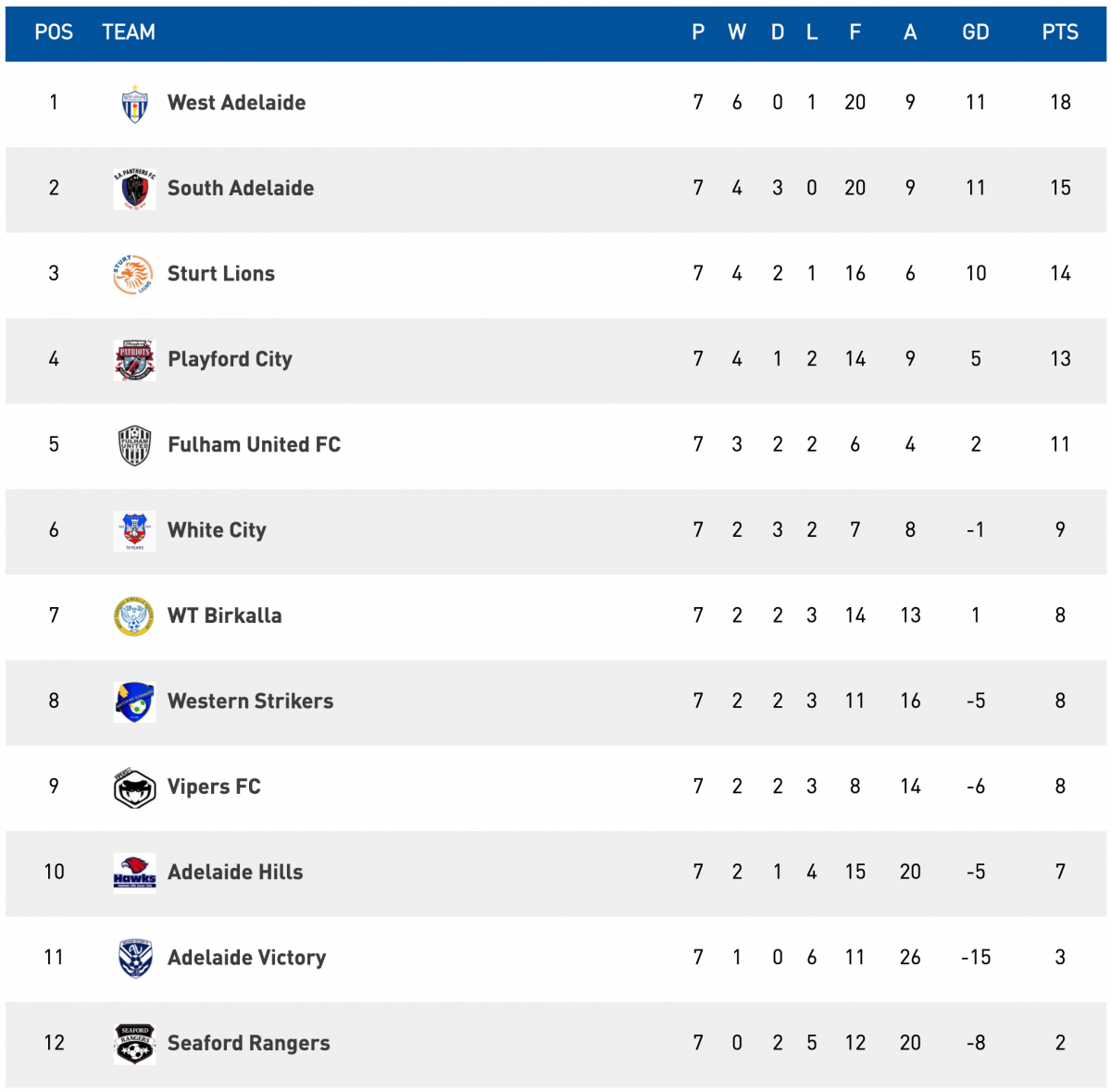 Gawler continues to impress and improve, with youthful exuberance sparking an emphatic start to the season. In our state’s longest away day, James Bannah and Iradi Baragomwa both contributed to the Eagles win; which lands them on top of the pile and leaves Northern Demons near the bottom of the table.

It all seems to be coming together for Eastern United. Their emphasis on playing youth players and attractive football sees them nipping at Gawler’s ankles in 2nd place. Aaron Acton made a statement, scoring all three goals in the 3-0 win. A bitterly disappointing result for Cove, who would undoubtedly see themselves as genuine promotion contenders and they will be hoping to make amends this week against Adelaide Uni.

Another fixture and another assertive performance by one of the league’s top sides; Vista delivering a well put together a second-half performance to run away winners against Pirates 2-1.

Mt Barker’s woes continue, in a game they would’ve been itching to get points, they fell short and lost 3-0 to Adelaide Uni. Early goals from Marco Balsamo, Yusuf Ahmed and Dion Guerrera established a comfortable lead for Uni, and left the Hill’s strugglers with too much to do.

Newcomers to the league Pontian Eagles secured a massive win over Noarlunga. Goals from Jack Mead and Eugide Seraphin land the Paralowie-based club in a respectable 8th position, with a final’s appearance in their inaugural year surely at the forefront of their minds. 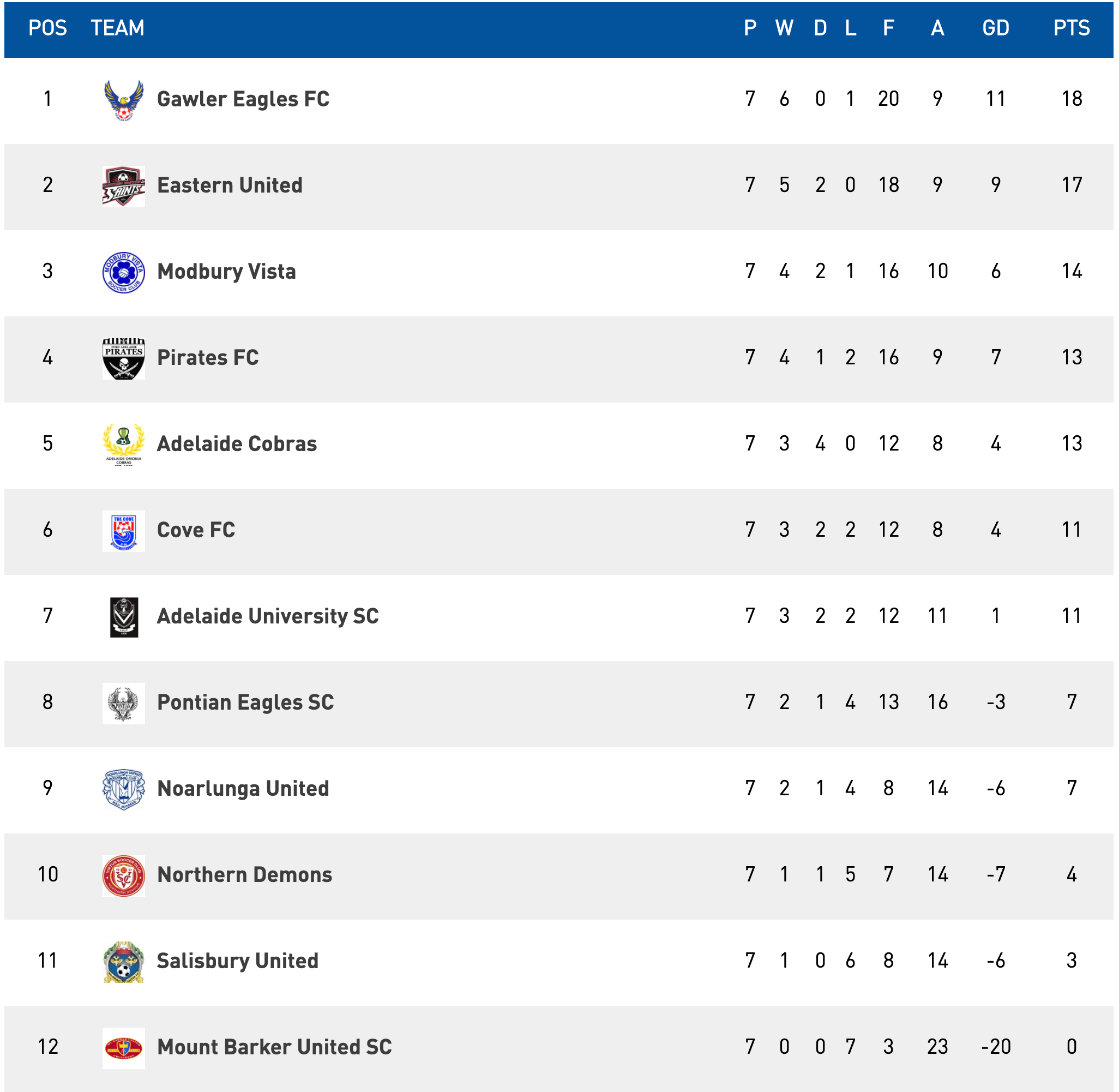