Tight at the Top | Round 7 State League Wrap

Western Strikers returned to form, putting up a comprehensive 3-0 win over Hawks at Carnegie Reserve. Violi and Scambiaterra both contributed with first-half goals, leaving Adelaide Hills with it all to do. Sasaki finished things off in the 85th minute for the home side, earning Strikers an invaluable win at this stage of this season.

South Adelaide and Birkalla have had utterly contrasting seasons; with Panthers overcoming almost every obstacle set in front of them, and Birkalla unable to deliver in the big games. It was no surprise that Panthers secured the home win, however the manner in which they secured it may have surprised some. The 5-1 win was an attacking masterclass, and it was that man again, Jonathon Rideout, banging four goals and keeping his side in contention for automatic promotion.

Playford Patriots, they’re coming. Another emphatic home performance saw them run away 5-1 winners over the ever-struggling Seaford. Youngster Brad Ballentine kicked things off in the 18th, and then Kegan Osborne made a name for himself with a tidy hat-trick. Kurtz sealed the deal in the 84th with a well-taken penalty.

West Adelaide got the job done once again, running over Adelaide Victory 3-1. The big names were in amongst it in particular, with Yasmin Sudic scoring in the 37th, and Veteran Ricardo Da Silva scoring a late brace.

Fulham put up a valiant fight this week against White City, however their vigour and two goals that came with it, simply weren’t enough. A Karl Phelps brace and another goal from Harley Gepp was enough for Beograd to secure the win, and essentially secure fifth-place.

Vipers were simply outclassed this weekend by Sturt, who are going from strength to strength. In what was the third 5-1 score-line of the round, Lions had five different scorers, signifying a marvellous team performance. Gonzalo Rodriquez was back on the scorers list, as was Taylor, Woollard, Gravas and Sortini. 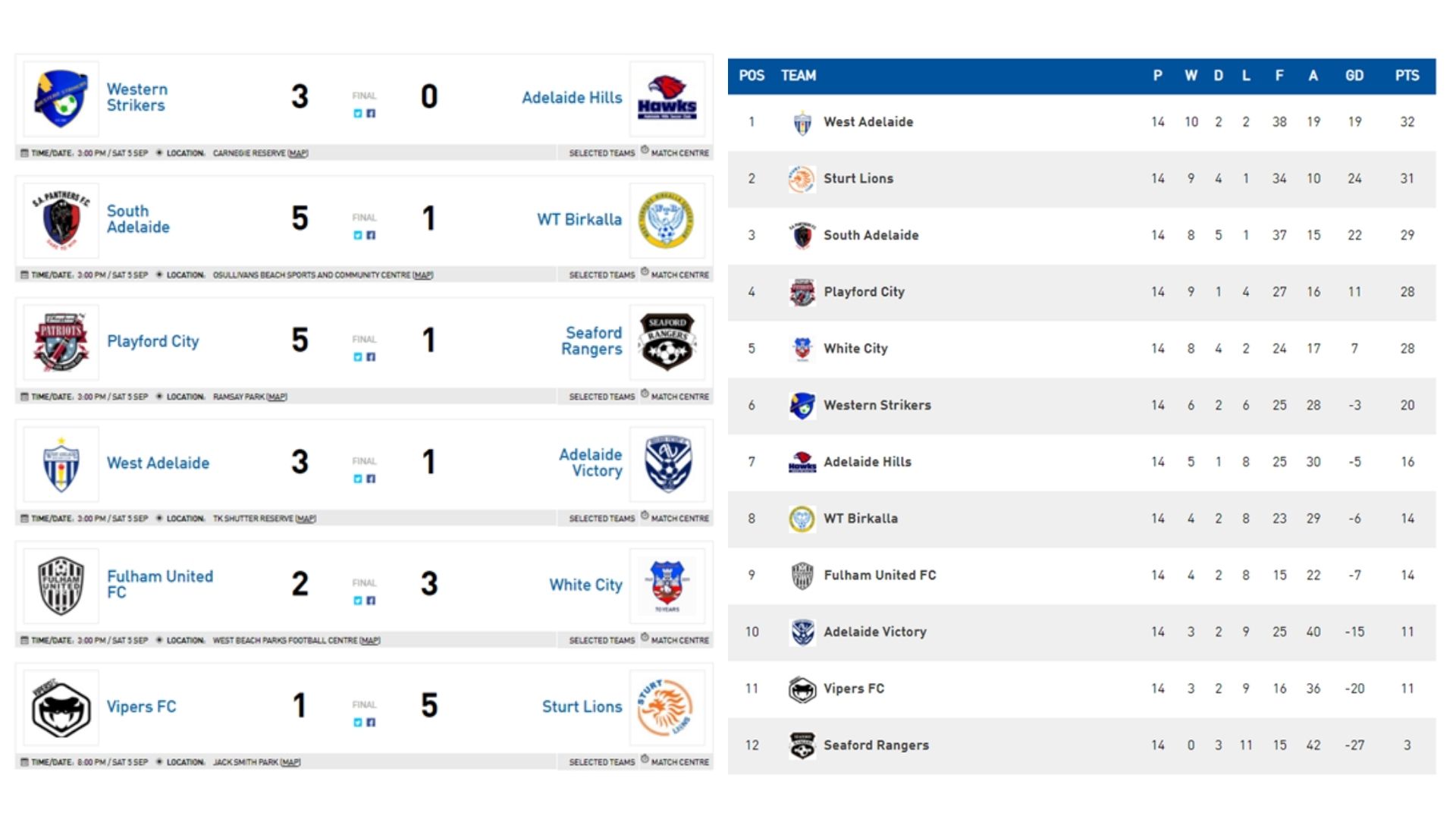 It’s hard to go past Eastern United when talking about State League 2 promotion certainties.  They recorded yet another win this weekend, beating a quality Cove outfit 3-0 away from home. Pierre Ndayirata started things off in the 10th minute, however Eastern had to wait another 47 minutes for their next goal, as Aaron Acton scored in the 57th. Veteran Nick Budin finished things off in the 73rd, Eastern still sit top of the pile.

Modbury Vista still have first place in their sights, their 3-1 away win over Pirates keeps them within one point of Eastern. A first half brace from McLaughlin was the difference. Vista will be looking to maintain this pressure as they come up against Gawler this week, a massive game in relation to promotion.

Salisbury and Cobras played out a ten-goal thriller at Newspot Stadium. Unfortunately for the home side they were on the wrong side of this goal-fest, as Cobras held on to win 6-4. This result sees Cobras hold on to fifth, and Salisbury still slugging away down in eleventh.

In another high-scoring affair, Adelaide Uni managed to beat Mt Barker 4-2 at Cornerstone. Mt Barker have been showing some signs in the past month, with two more goals this weekend there would be a sense of encouragement. Uni themselves needed this win to stay in the hunt for top six, they did so and now sit just one-point off that sixth finals spot.

A strong second-half performance earned Gawler a 2-1 win over Northern Demons. Two goals in quick succession from Manirampa and Baragomwa in the 58th and 61st set the win up.

Finally, Pontian could not get past Noarlunga at home, losing out 1-0. Noarlunga’s goal came from Angove in the 40th, from here United put in a gritty performance to hold on and earn a much-needed win. 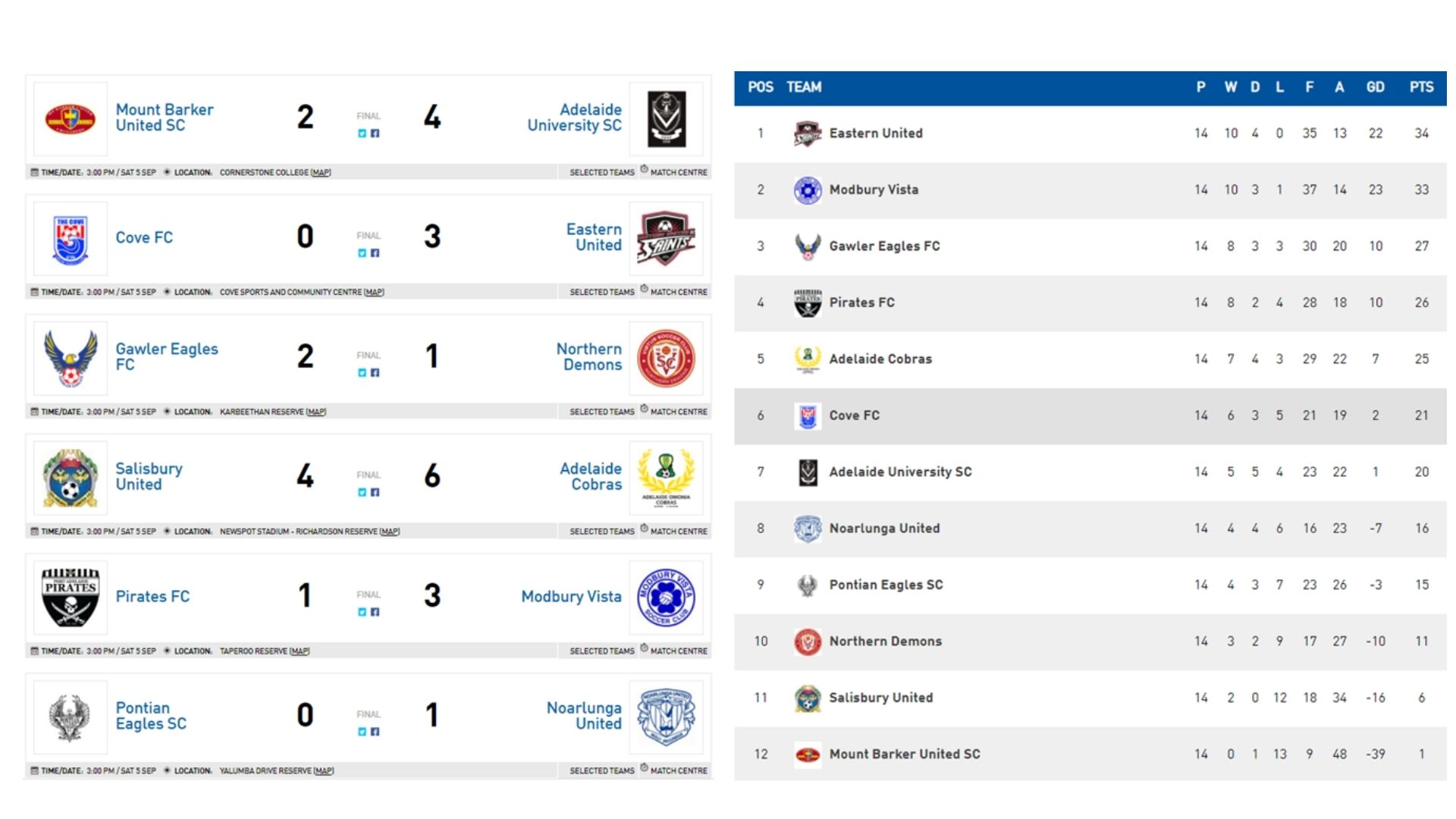