Playford victories and Ramsay Park go hand in hand. The Patriots needed a result against Strikers to stay in contention for the top spots, and they did just that. Daniel Ryan kicked things off early, scoring in the fourth minute. Riak Mayol furthered Playford’s lead in the 31st. Strikers could only manage a late consolation, as Katsigiannis converted in the 91st. Playford still sit in fifth, but are only two points off third, and five points off first.

In what was tipped to be game of the round, Sturt and White City played out a sleepy 0-0 stalemate. Both sides are knocking on the door for automatic promotion, and this defensive battle showed both teams aren’t willing to budge an inch.

Hawks continue their meteoric rise, soaring past Victory 2-1 in a gritty away win. Lenzi and Markham got the ball rolling early in the first half, and Hills held on despite a Phillip Cash goal in the 51st.

West Adelaide looked the goods against Fulham, running out 3-2 winners.  Da Silva helped himself to a brace, supplemented by Stefanopoulos, who has made a habit of scoring recently. This was a vital three points for Hellas, who’s fellow top spot contenders all dropped points.

Birkalla have been falling away as of late, but got the job done against Seaford. A Trey Williams hattrick inspired the 5-2 win over the Rangers, who simply haven’t performed at all since the restart. Seaford’s fate is all but sealed, however Birkalla sit just a point off Hawks in sixth place.

South Adelaide will be disappointed with their 4-4 draw with Vipers, missing the opportunity to put some real space between them and those trailing. Rideout grabbed a first half brace, Robert Parker and Mitchell Nicholson also converted for Panthers. Vipers will be pleased with the result, as it showed their capacity to knock off the bigger teams. Papapetros also helped himself to a brace, as Russo and Akot also converted. 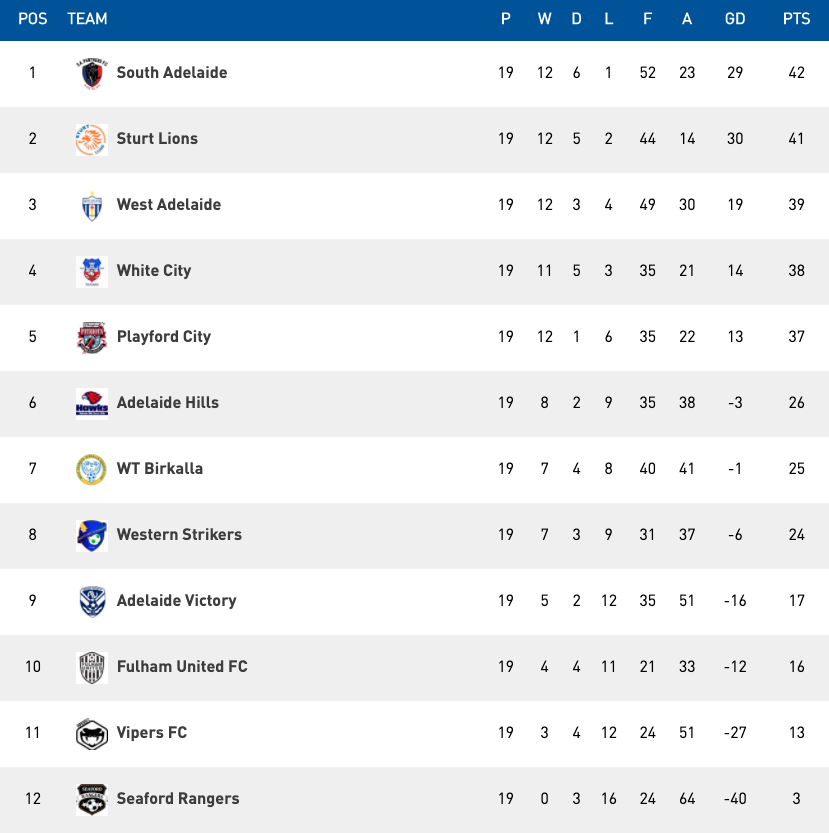 An Omari Didero hat-trick inspired what will be a memorable win for Pontian. Pirates will be disappointed with the 3-1 loss, as it sees them slip to a seven-point deficit from Cobras in third.

Gawler saw off a quality Cove outfit, as Benny Kovadio’s brace laid the foundation in the 2-0 win. The Eagles now sit in fifth, as Cove sit in seventh.

Salisbury were on the better side of a nine-goal thriller, running over Mt Barker 7-2. Bebbington and Kania helped themselves to braces, and in what has been an inconsistent season; Salisbury now have a glimmer of promise for next season.

Noarlunga’s recent form has been promising, a deep finals run may even be in the question. However, Cobra’s showed too much class on the weekend, winning the fixture 3-1. Savino, Chehade and Orphanou shared the load on the goal front, which sends their team to third place.

Eastern slipped up again, as Adelaide Uni secured a famous 4-2 win. This is a massive result for Uni, as they earn themselves a five-point buffer from seventh place. Eastern are now five points off the pace, as Vista reaffirm top spot.

A late scramble has seen Vista sneak over Northern Demons. Demons were 2-0 up, Marchioro started the comeback in the 50th minute, as Josh Briggs equalised in the 86th. Unfortunately, it was an own goal that separated the sides in the 3-2 thriller. 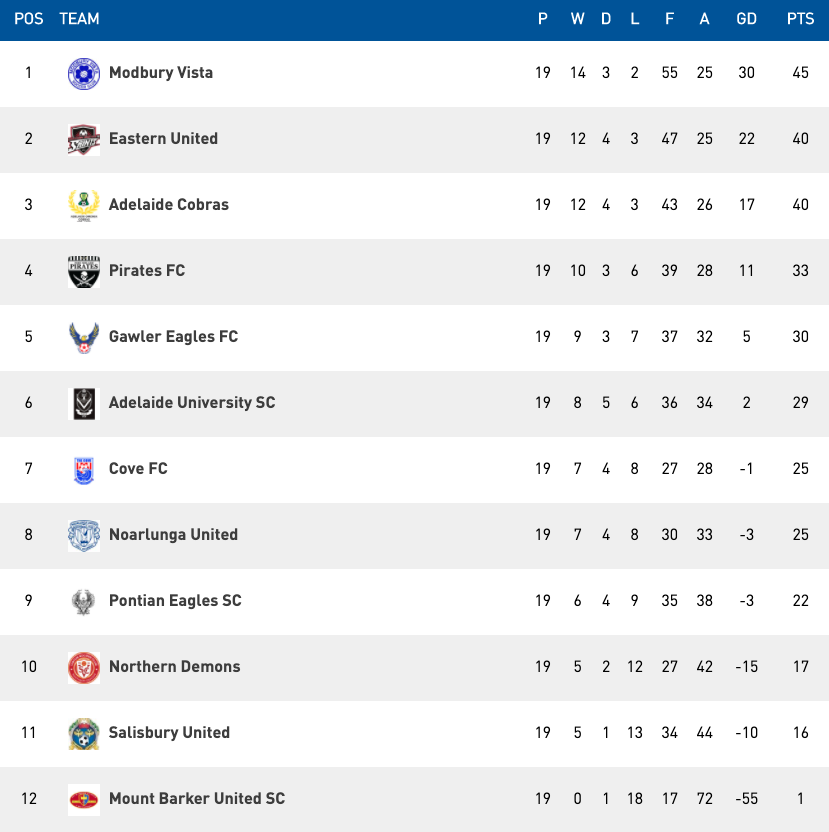