Inter and Metro kick off Round 8 of WNPL action tonight at VALO Football Centre, with both sides entering the contest off the back of important victories.

A come from behind 2-1 win over West kept Inter’s unbeaten streak in the league alive, the only one still active in the competition after seven rounds, and saw them reclaim top spot as we reach a third of the way through the season.

Metro have reignited their season after a shaky start by winning their last two, most recently defeating City 4-2 away from home, and find themselves back in the top half where they’ll be aiming to cement themselves.

With West breathing down their necks, Inter will be wanting to get another big win under their belts, but they’ll know to not write off the champions. 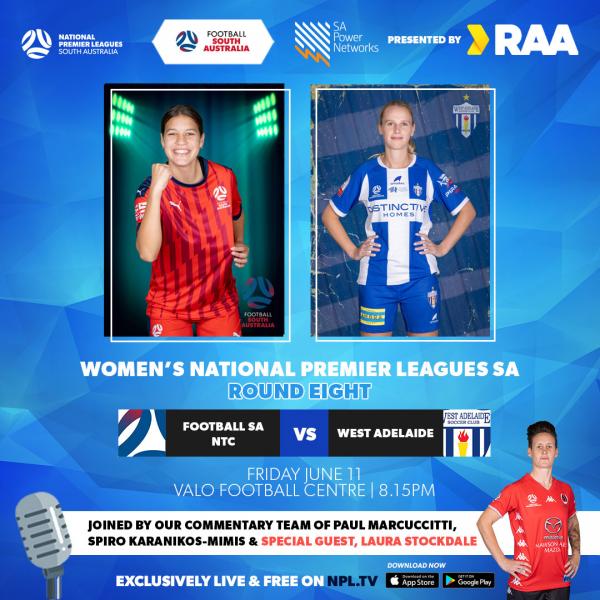 The second of tonight’s doubleheader is another big fixture, as high-flying NTC take on second-placed West in what promises to be an exciting contest.

NTC won their second match in a row last weekend, easing past Uni with a 4-0 victory that brought them just four points away from the league summit and provided their first clean sheet of the season.

West’s stint at the top of the ladder was short-lived, as a 2-1 defeat to Inter marked their first of the season but, encouragingly, they remain just a point off the pace entering this round.

With both sides vying for spots higher on the ladder, this fixture promises to be an entertaining one which could have ramifications deep into the 2021 season; it’s a big three points up for grabs.

With Fulham currently in last place on the ladder and Uni sitting a position above them, tomorrow’s encounter at Adelaide Shores Football Centre is an important one for both sides.

Five losses in their last five league fixtures makes for difficult reading for Fulham, who are five points adrift of their opponents tomorrow, with their most recent coming against Comets in a 2-1 defeat.

Uni’s win over Fulham in Round 5 represents their only points gained since Round 1, with their 4-0 defeat at the hands of NTC the third time in their last five league matches that they’ve conceded three or more goals.

The pressure is on for Fulham to pick up a much-needed first win of the season or risk being left further behind the pack, while Uni must win to keep the top half within their reach.

Comets and City round out this weekend’s fixtures tomorrow evening, both with a point to prove following their early season form.

The hosts picked up their second win last week, a 2-1 triumph over Fulham, that sent them a point ahead of City after seven rounds, a side who finished 33 points clear of them in the 2020s truncated season.

City’s early-season woes continued with a 4-2 loss in the Grand Final rematch, meaning they’ve now only won one of their opening six matches (albeit they’ve only lost two of those).

Comets entered the season with finals aspirations and victory tomorrow could put that reality well and truly in their grasp, with three points keeping them in touch with Metro in fourth, but City will be keen to rediscover the spark that has made them a force over the years.