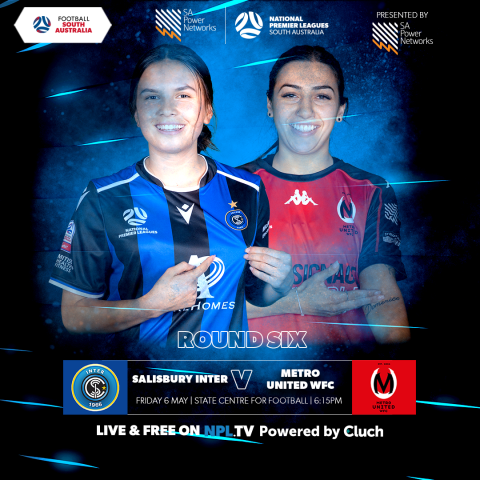 Currently sitting in fourth, Salisbury Inter’s 2022 season thus far has been strong, winning three out of the first five matches. The last round saw Salisbury Inter record a 6-1 win over Modbury Vista, with Emily Heazelwood recording her third and fourth of the season, with Maria Jose Rojas also securing her fourth of the season. Khal Adam Khan’s first goal of the season was one to remember, with her strike earning her a nomination for Goal of the Week. Salisbury Inter is now looking to secure their fourth win in five games, as they search for a place in the top two, with only two points separating themselves and first.

Metro United WFC’s start to the 2022 season has been one of the mixed emotions, recording two wins and three losses in their opening five matches. Although holding the second-worst defensive record in the competition with 20 goals already conceded, Metro United WFC showed great improvement last round against Adelaide City, as it took a 79th-minute goal from their opponents to secure a 2-1 win. Improving each week, Metro United WFC will hope to secure their third win of the season, while leading goal scorer Victoria Mansueto will hope to continue her great start to the 2022 season that has already seen her grab four goals.

Football SA NTC and Adelaide City meet in the final Friday night match for Round Six, with both clubs searching to go top of the WNPLSA.

Football SA NTC remains the last undefeated team in the WNPLSA for season 2022, winning three and drawing two of their five fixtures. Thus far, the only points Football SA NTC has dropped have come against top-four rivals Salisbury Inter and Adelaide University, with the latter coming last round as Adelaide University’s 68th-minute goal erased the chance to remain top of the ladder. Attacker Claire Scarpin has started the 2022 season in great form, scoring four in five games, with her last coming last week as her long-distance strike gave her side an early lead in the fifth minute, earning her a nomination for Goal of the Week. Remaining the league’s best defensive side after five games, Football SA NTC will aim to continue this as they look to withhold a strong Adelaide City team.

Heading into Round Six, Adelaide City has won four of their opening five games, with their only loss coming against Adelaide University in Round Five. Regaining their winning ways in Round Five with a 2-1 win over Metro United WFC, Adelaide City will hope to continue this form heading into their showdown with Football SA NTC. Katie Bowler continued her great start to the 2022 season against Metro United WFC, securing her fourth goal, while new signing Zoe Tolland scored her first goal for the club to secure the victory. Strong in attack and defence, Adelaide City has a great opportunity to gain the top spot if results go in their favour. 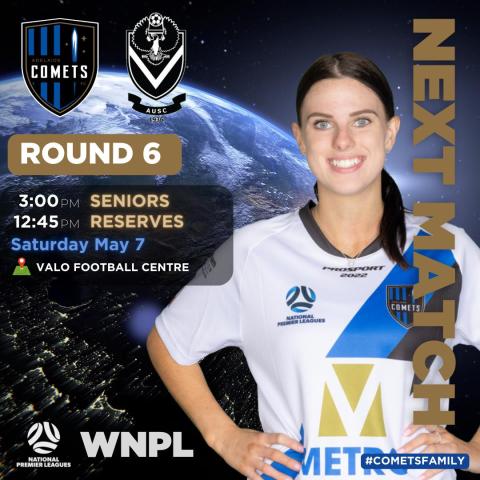 After starting the season with three straight wins, Adelaide University’s form has dropped off in recent weeks, losing and drawing their last two fixtures. This has seen the team drop to fifth, however, still only two points separating themselves and first. Starting the season with a difficult fixture draw, Adelaide University has faced three of the current top four in the last three matches, only losing one, demonstrating their improvements from last year. In their last fixture, Adelaide University earned a point as they drew with then league leaders Football SA NTC 1-1, with Gemma Macfarlane's 68th-minute goal helping her side to a draw.

Adelaide Comets have experienced a steady start to the season which sees them sit sixth with seven points. Experiencing two wins and a draw thus far, all Adelaide Comets points have come against the bottom three teams, with their two losses coming against Salisbury Inter and Metro United WFC. Adelaide Comets will be devastated not to have secured their third win of the season against WT Birkalla last round, as Nanako Sasaki’s wonder strike and Kiara Osullivan’s 86th-minute goal were not enough to earn three points, as WT Birkalla equalised in the 89th minute. Adelaide Comets held a strong record against Adelaide University in 2021, winning all three games, and will hope to replicate this to earn another win before they face the current top three in the next three rounds. 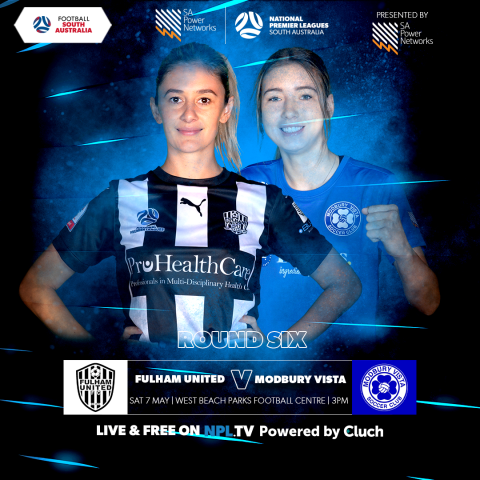 Two of the remaining three teams without a win in the WNPL face off in Round Six action Saturday afternoon as Fulham United host Modbury Vista at West Beach Parks Football Centre.

Fulham United have struggled in their opening five matches which have seen them lose four and draw one, earning them a ninth-place position with only one point recorded. In their last outing, Fulham United was beaten by West Adelaide 6-0 which marked the fourth consecutive defeat, while demonstrating their early-season struggle in the final third. Currently only scoring two goals to start the season, their Round Six matchup is the perfect opportunity for the team to increase their goal difference and record their first win of the season.

Modbury Vista’s first five games of the season haven't started well, losing every game thus far. In Round Five, Modbury Vista experienced a 6-1 defeat to Salisbury Inter showcasing the team’s early-season defensive woes, with the team recording 25 goals conceded in only five games, averaging five goals a game. The team will look to rectify this form as they face statistically the worst attacking team in the league who are also yet to record three points.

This matchup is the perfect opportunity for one of these teams to jumpstart their season.

WT Birkalla look for their first win of the season, however, face a massive challenge as they are set to meet league leaders West Adelaide in Saturday night action at Jack Smith Park.

In Round Five, WT Birkalla secured their second point of the season as an 89th-minute goal by Mariah Aplin rescued a draw for her team, erasing the possibility of their fourth consecutive defeat. To start the season WT Birkalla has been defensively strong, holding the best defensive record out of the bottom five teams, however, their attacking output has prevented the side from securing their first three points of the season. Already having faced three of the current top five, WT Birkalla will need to be at their very best to overcome current league leaders and top-scoring team, West Adelaide.

West Adelaide’s current position at the top of the WNPLSA cannot be questioned, with the team securing a reputation as the team to fear in season 2022. In five matches West Adelaide has scored 28 goals, averaging just over five goals per game which see them hold the best return in the league, almost doubling the team with the current second-best output. Harriet Burnett and Racheal Quigley are both leading the golden boot race with seven goals each, demonstrating the great attacking options at West Adelaide's disposal. Having won four consecutive matches, West Adelaide has only conceded twice since their Round One 5-3 defeat to Adelaide City. Currently leading the pack on goal difference, West Adelaide will hope to extend their lead in what is a strong WNPLSA league which sees only two points separating themselves and fifth. 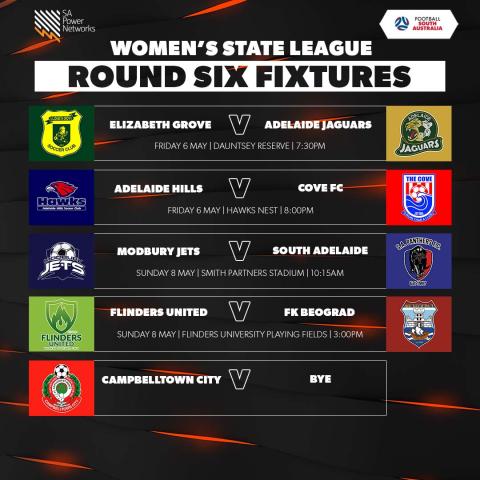 Elizabeth Grove looks to rectify a poor round five performance which saw them lose 9-1 to Cove FC as they search for their second win of the season against league leaders Adelaide Jaguars. Elizabeth Grove has started their season with three losses in four games which see them sit eighth in the Women’s State League. They may find it difficult to achieve their second win of the season, with opponents Adelaide Jaguars in great form to start the season. After starting the season with four wins in their opening four games, Adelaide Jaguars experienced their first defeat of the season against Modbury Jets in Round Five as they lost 1-0. The team will be eager to return to winning ways to increase their lead at the top of the Women’s State League.

After a week off with a bye, Adelaide Hills will be eager to get back to winning as they face Cove FC at the Hawks Nest in Friday night football. Adelaide Hills have had a mixed start to the season, winning two and losing two in their opening four games, which see them sit in fifth. Cove FC will look to continue their four-game unbeaten run, which has seen them win three during this period as they attempt to claim the top spot in Round Six. Cove FC secured a convincing 9-1 win over Elizabeth Grove in Round Five which helped earn a place in second.

Flinders United will look to rebound as they now face FK Beograd in Sunday afternoon Round Six action after they experienced their first defeat of the season in Round Five. Losing 1-0 against South Adelaide, Flinders United missed the perfect opportunity to win and take the top spot in the Women’s State League. Currently sitting three points from the top spot, a win could see them jump back in contention for first place. After starting the season with three losses, FK Beograd bounced back with a 3-2 win over Elizabeth Grove in Round Four, however, could not capitalise on this form as they forfeited their match with Campbelltown City in Round Five. FK Beograd will hope to secure their second win of the season.

Campbelltown City has received a bye in Round Six.