Round 7’s ‘Game of the Round’ featured two of the State League’s best and most promising young sides, Playford vs Adelaide Victory. One can expect both these teams to feature come finals time, and this week’s 3-2 victory for Playford could have been a small peak behind the curtain of an eventual finals clash.

The home side came into the game with three points under their belt and their tails up, ready to overcome a Victory side who “have made a few good additions to their squad and started the season quite well” Playford captain Daniel Ryan quoted.

Other than last week’s disappointing home loss to Adelaide Hills, Victory have been flying– coming into this game in third spot. Evidently, we were bound to witness a show case of young talent. In terms of the league’s young stars, few have shined brighter in the last couple seasons than Daniel Ryan. Ryan has continually provided goals for the Patriots and saved two of his best efforts for Victory.

The first twenty minutes saw Playford get the better of their opponents, they had majority of the ball and looked the more likely out of the two sides. The Ramsay Park faithful were eager for their team to capitalise and were vindicated when their young captain scored a superb free kick in the 20th minute. Appearing as if he was going to cross it in, Ryan fooled everyone and instead curled it into the far left-hand corner, Victory gun Vasili Tryfopolous was helpless due to the precision and power of the strike. Speaking on his opener, Ryan stated

“Vas is a good goalkeeper, especially with his feet, but I fancied myself to be able to get up and over him with the right amount of dip”.

The old adage, ‘where there’s one there’s two’, came to fruition three minutes later as Ryan once again converted from distance. By the way of some route one football, Tryfopolous was forced to meet the ball and clear his line – he failed to do so. His mistimed punch combined with a miscommunication with a Victory defender left the goals open and the stage set. It spilled out to Ryan, who ever so calmly chipped it straight back over everyone and into the roof of the net, 2-0.

Credit must be paid to both sides, despite the score-line they both persevered to continue to play good football. Victory’s intentions were noble, but their execution was lacking at times, they were lucky Playford didn’t capitalise on some loose passing and awkward defending. Victory defender Ben Toffoli relayed that “it was a very tough, very physical game”.

Leading up to the 30th minute, Victory strung together some excellent passing and were measured in their approach. After some tidy work by Scardigno, the ball found its way back down to Blefari. Everyone was expecting another pass, what came next can only be described as an “absolute wonder goal, goal of the year in my opinion” Toffoli said. Blefari showed his class and football pedigree with this outrageous effort – taking a touch just over the half-way line, touching it past the defender, and then blasting it into the top right corner from at least 35 yards out – special.

Playford were looking more likely as the game went on, and with ten minutes to go they had their breakthrough. A contentious hand-ball decision made by the linesman left Victory defenders seething. Farrell stepped up and slotted it into the bottom right corner, giving Playford some much needed breathing room. Both sides kept attacking and in the 91st minute it was Victory’s turn to score a pen of their own. Unfortunately, it was too little too late for the away side, as Playford held on to secure the 3-2 win.

This result sees Playford climb up to fourth, they’ll be looking to make it three wins from three against strugglers Fulham and will “(look) to bring some consistency through the middle part of the season” their captain said. Victory however slide back down to fifth, and with two losses on the bounce – are in danger of falling out of the six. They’ll look to bounce back against West Adelaide, who are always a tough opponent on their day.

Modbury Jets triumphed 3-2 winners over Birkalla. Conant started the home side off in the 10th minute until Birkalla’s Plush responded in the 19th. Pollock gave Jets the lead in the 66th, which was immediately cancelled out by Conway. They looked set to share the points until Pollock grabbed his second in the 94th, securing the win for Jets.

Eastern blew away Western Strikers 3-0 away from home, a huge win for them considering they were sitting in the relegation zone prior to this result. A brace from Matija and a 95th minute goal to Ellul were the difference. 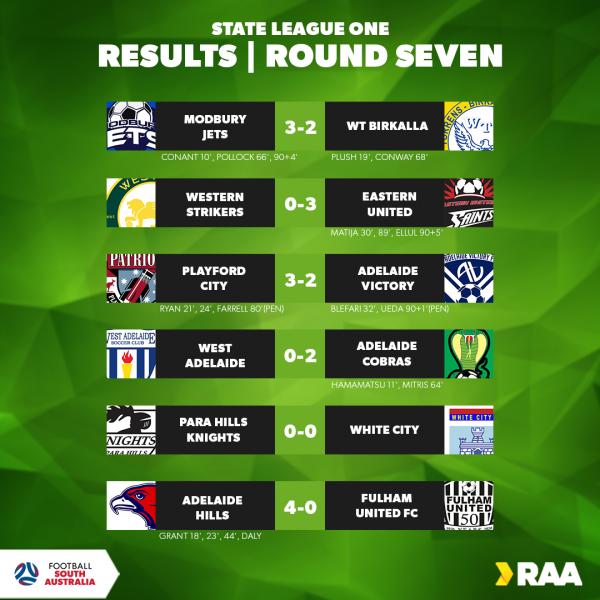 West Adelaide’s struggles continued as they failed to beat Cobras, who are rooted to the bottom of the table. The 2-0 result was much needed respite from what has been a dismal 2021 campaign. Hamamatsu and Mitris were the difference for the away side, who will now look to build on this result and climb up the table.

Para Hills played out a 0-0 stalemate with league leaders White City. The result sees White City hold on to top spot, whilst Knights slip down to ninth.

Ollie Grant had a day to remember, banging four goals in an extraordinary individual performance. Hawks beat Fulham 4-0, putting them within a point of the top six and Fulham perilously into the relegation zone.

Seaford were back on the winners list and registered a much needed 3 points against the ever-struggling Mt Barker. Having only won two out of their six previous, the Rangers were hovering above the relegation zone and losing touch with the other midtable sides. The home side looked good from kick off, with Donk setting the tone with a 6th minute strike. Watson piled on the misery for Mt Barker in the 15th minute, the 2-0-win signifying Mt Barker’s failure to register a single point this season.

Northern Demons finally kickstarted their season with a well-earned point against league leaders Port Adelaide, who themselves will be disappointed they wasted a chance to put some daylight between them and Salisbury. The 2-2 draw between teams on opposing sides of the ladder, shows the uphill task any away side faces on the perilous trip up the A32.

Pontian Eagles kept themselves within a game of top spot with an impressive 4-1 drumming of Modbury Vista. 0-0 at the interval, no one was expecting the goal-fest that was to ensue. Abachu tore the game open for the home side with a two-minute brace just prior to the 70th minute. Seven minutes later and it was 4-1 for the eagles, courtesy of yet another brace, this time from Dimas. This result lands Pontian in fourth and holds them in good stead for the rest of the year. Vista on the other hand need to get out of first gear, as they sit in third-last on a measly 3 points. 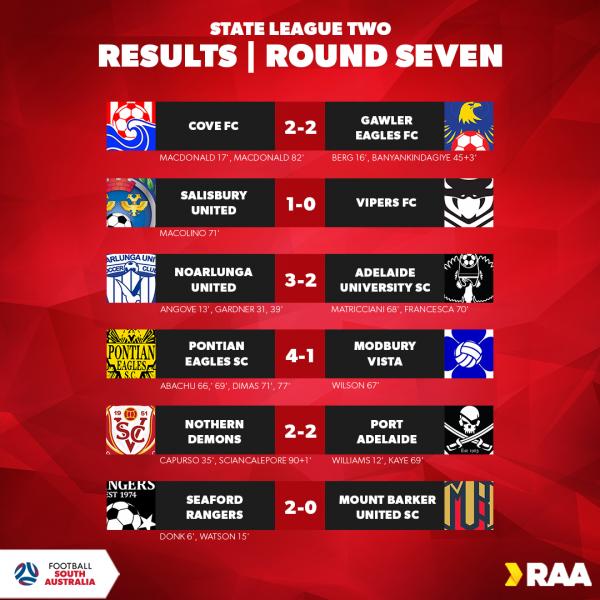 A first-half blitz from Noarlunga was enough to see the home side hold off Adelaide Uni 3-2. Angove helped himself to a goal in the 13th minute, and then Gardner registered a brace with goals in the 31st and 39th. Uni came out the sheds looking like a different side and managed to pull it back to a one goal deficit. Alas, the home side held on and now leapfrog Uni into third place.

Salisbury showed their grit and determination to be one of the teams to beat this year, beating a good Vipers side 1-0. The home side left it late, with Macolino banging a goal in the 71st. This result sees United surge up into second place, and Vipers slide down to eighth.

Cove hosted Gawler in a nail-biting mid-table clash. The spoils on offer were a place in the top six, with Gawler looking to put some daylight in between them and their southern counterparts. They looked set to complete their task, but Macdonald had other ideas, sealing his brace and the sharing of the points in the 82nd minute.