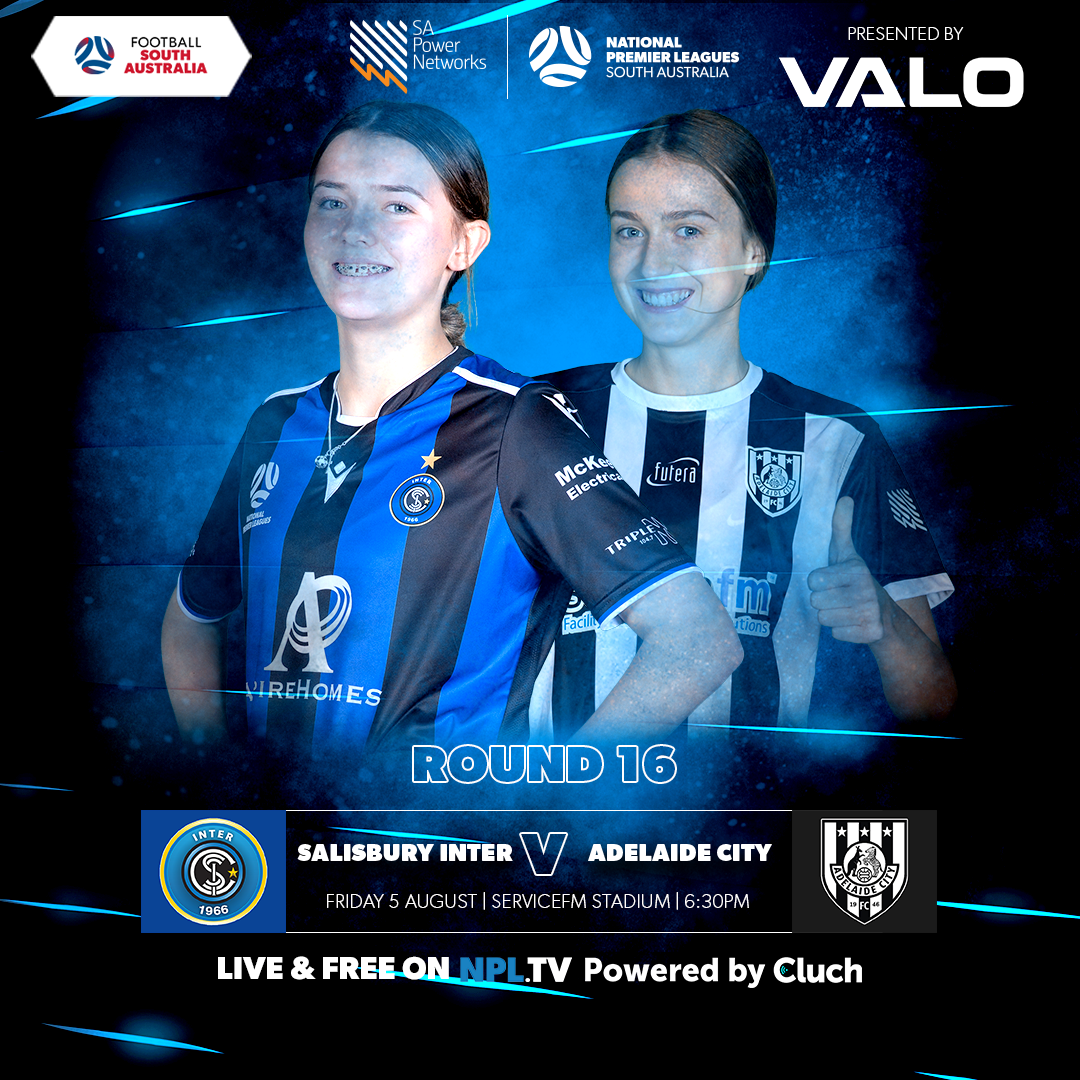 The race for a place in the top two continues tonight as third place Salisbury Inter host Adelaide City at ServiceFM Stadium. After facing two weeks without a victory in Round 12 and 13, Salisbury Inter has bounced back in great fashion as they recorded two wins in their last two weeks against the likes of Metro United WFC and most recently Modbury Vista. It was a strong attacking performance by Salisbury Inter in their 4-2 win over Modbury Vista last week, with Sharni Tansell, Mina Nishitani, Nicole Calder and Emily Heazlewoods all scoring to rescue the three points. Three points will see Salisbury Inter jump back into the top two, however a loss with see Adelaide City go four points clear heading into the final two games of the season.

An Isabel Hodgson double earned Adelaide City the victory in their last meeting with Salisbury Inter. Isabel opened the scoring for Adelaide City in the opening 14 minutes, with Maria Jose Rojas Pino finding the equaliser in the 70th minute before Isabel found the winner in the 87th minute.

Adelaide City returned to winning ways last week as their 3-0 victory over Metro United WFC saw the team keep their second-place status for another week, with a Florence Russell double and a Mawa Sumaoro goal securing the three points. With West Adelaide currently only one win off winning the Premiership, Adelaide City will hope to continue to build great form heading into the Finals Series, while securing second place. Three points will see Adelaide City take a four-point lead in second with only two games remaining.

Fulham United’s search to remove themselves from the relegation race continues for another week, with their matchup with Metro United WFC becoming extremely important. The team faced a big defeat last week as they lost 5-0 to league leaders West Adelaide, marking their tenth loss of the season. Currently only three points off the relegation play-off spot, Fulham United will be hoping to increase this to six heading into the final two games of the season.

On the back of two losses, Metro United WFC’s hope of a place in the top five is gradually slipping away, with eight points currently separating them and fifth place. The team faced a hard loss last weekend as Adelaide City beat them 3-0, marking their second week without scoring a goal. Metro United WFC will need results to go in their favour over the next three rounds, while needing to stay perfect, with a loss this round or a win for Football SA NTC will take them out of contention for the Finals Series.

Adelaide Comets' search for a place in this season's Finals Series is almost complete, with the team now only one point from securing a position in the top five. It’s been an incredible season thus far for Adelaide Comets that has seen them win nine of their opening 15 games, which now see them sit in fourth. The team extended their great run of form to four consecutive wins as they beat WT Birkalla last week with a Chrissy Panagaris double and a goal by Georgie Nicola. With a nine-point gap between them and sixth-placed Adelaide University, Adelaide Comets need only one point in their next three games to secure their Finals Series place.

It was an Adelaide Comets 2-1 victory in their last meeting with Football SA NTC as another Chrissy Panagaris and Georgie Nicola masterclass was on full display as a quick first-half double was enough to gain them three points. Michaela Belmonte was able to get one back for Football SA NTC on the day but could not spark any comeback.

Football SA NTC is also in their own impressive run of form that has seen them go four games unbeaten while winning all of their last three, including a 4-1-win last week against Adelaide University. It was an Emilia Murray double and goals by Camila Madriz Figueroa and Lily Di Cola that led their team to victory after they fell behind to an early Adelaide University goal. Currently seven points clear from sixth-placed Adelaide University, three points will guarantee Football SA NTC’s status in this season's Finals Series and will see them overtake Adelaide Comets in fourth.

West Adelaide could be crowned 2022 WNPLSA Premiers after this week, with a win guaranteeing the Premiership. It has been an extraordinary season by West Adelaide thus far, with the team winning 13 of their 15 games while only recording one loss along the way. The team's unbeaten run continues last week as they secured another three points with a dominant display over Fulham United. A Maddie Durieu double, an own goal and goals by Racheal Quigley and Nicole Blackett led the team to a 5-0-win last round. Holding a seven-point gap over second place Adelaide City, three-point will guarantee the Premiership with two matches remaining.

Adelaide University will be looking for revenge after West Adelaide won comfortably the last time they met, with a Racheal Quigley hattrick and goals by Laura Johns and Anna Pritchard securing a 5-0 win.

Adelaide University faces a major uphill battle to secure a place amongst this season’s top five as they look to close a seven-point gap with fifth-placed Football SA NTC. Adelaide University has faced a difficult couple of weeks, which has seen them lose all their last three games, including a 4-1 loss to Football SA NTC last week with Stella Rigon scoring the team's only goal of the game. With a difficult game ahead as they face league leaders West Adelaide, a loss will take them out of contention for a place in the 2022 Finals Series. 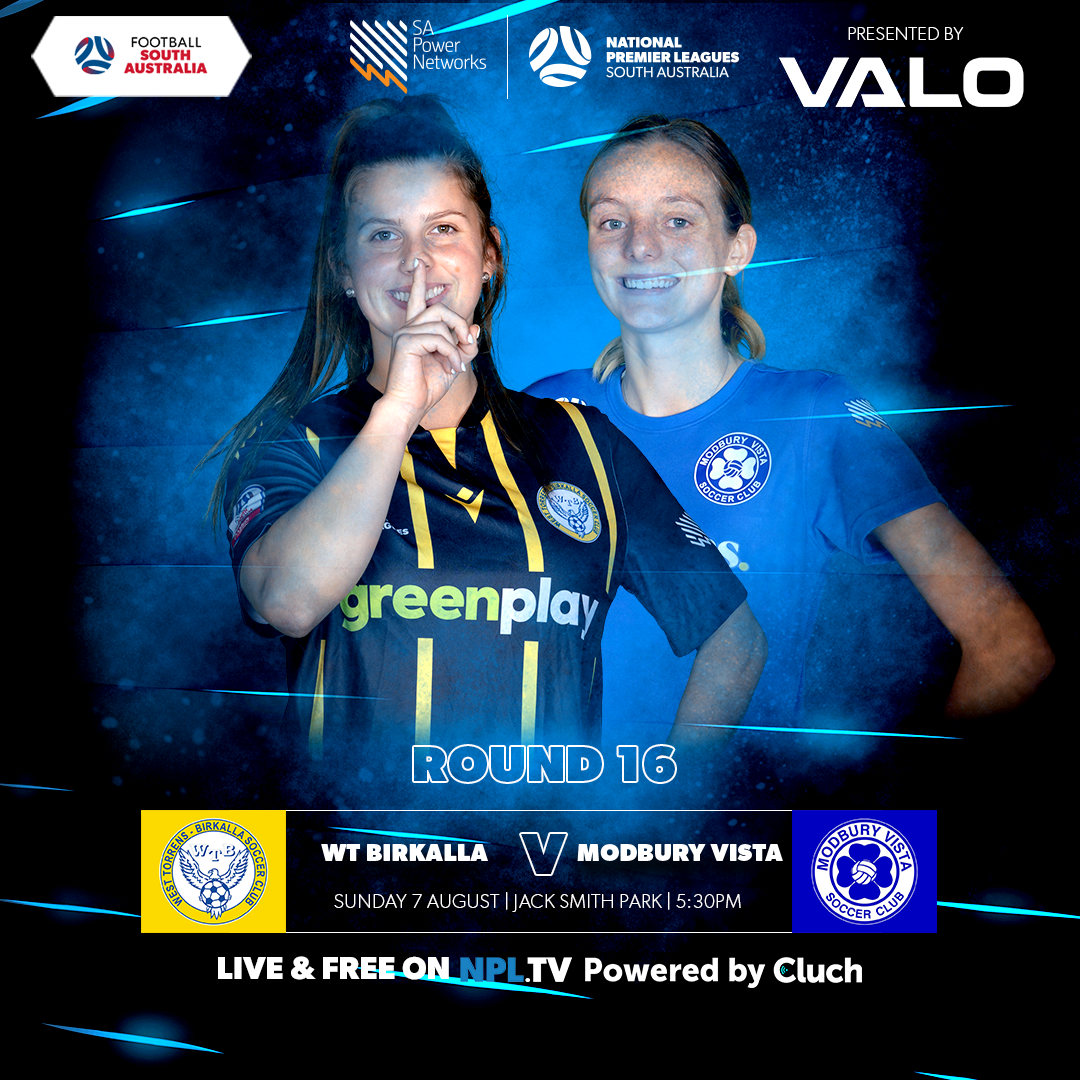 It’s a must-win encounter Sunday afternoon as Modbury Vista and WT Birkalla face off in a match that could shape the relegation battle.  WT Birkalla currently sits at the bottom of the WNPLSA with only three points record, with the team currently on a run of eight losses, remaining goalless in seven including a 3-0 loss to Adelaide Comets last round. Three points are vital for WT Birkalla this round, as a loss to their opponents will see them go four points away from safety with two games remaining.

WT Birkalla’s last point recorded was against Modbury Vista in Round Seven as a 68th-minute penalty was scored by Marie Heinrich to level the score after Alana Fitzsimmons 53rd minute opener for Modbury Vista.

Modbury Vista will be looking to secure their first win of the season as they search to remove themselves from the relegation battle. Although being only one point above WT Birkalla, Modbury Vista has been reasonably stronger in recent weeks which has seen them record valuable points that have removed them from the foot of the ladder. Recording their eleventh loss last week as they were beaten by Salisbury Inter 4-2, Modbury Vista continued their impressive goal-scoring run, with Alana Fitzsimmons gaining her sixth of the season, while Pirrie Weeks recorded her second. A win will see them go four points clear from the relegation zone, while they could jump out of the relegation playoff spot if Fulham United loses. 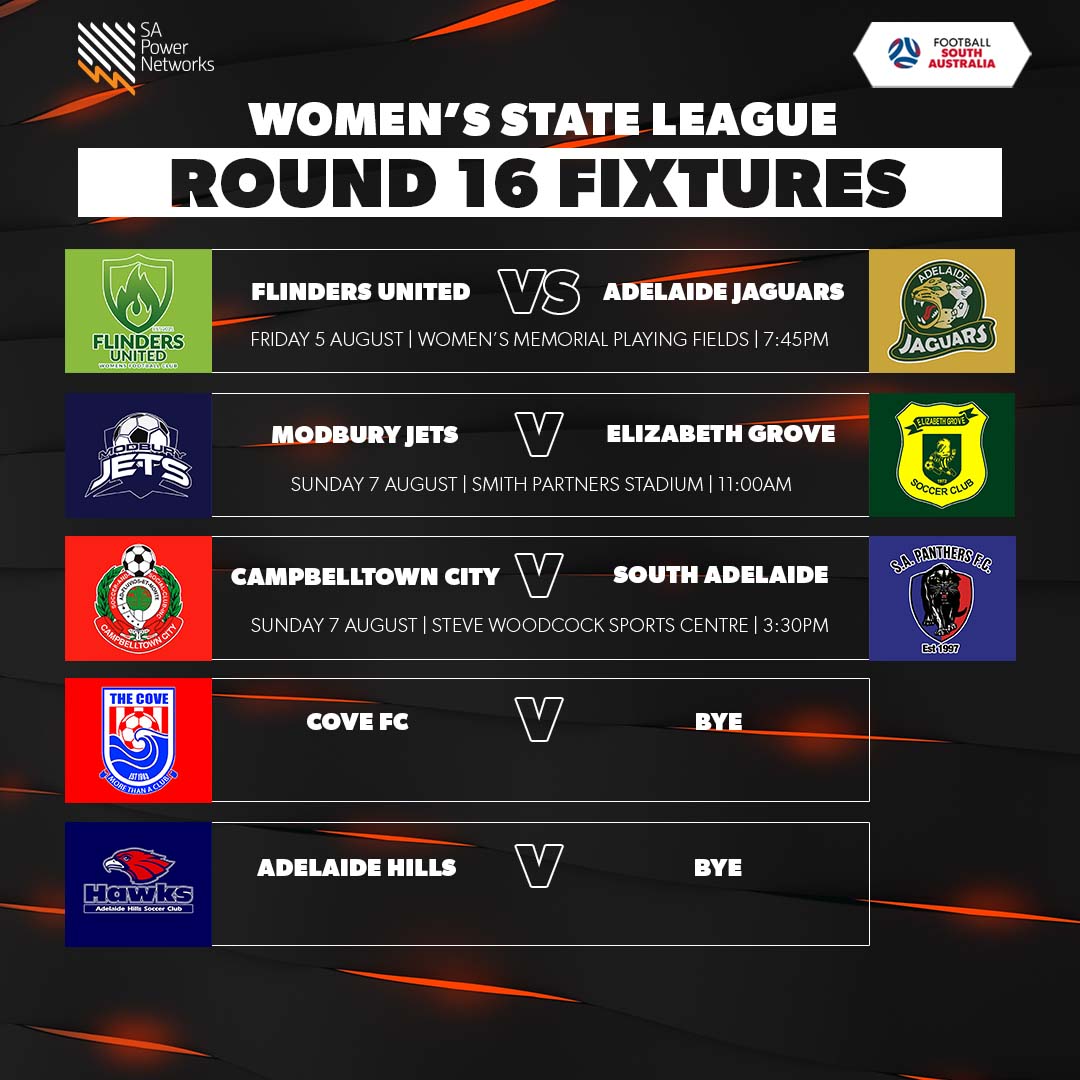 Flinders United search to further increase their two-point lead at the top of the Women’s State League as they face Adelaide Jaguars in Friday night action. Flinders United are currently on a seven-game winning streak that has seen them remain in pole position to achieve promotion this season. After receiving a bye last round, Flinders United are eager to continue their winning ways in Round 16. Having struggled recently, Adelaide Jaguars returned to winning ways last week as they secured a 7-0 win over Elizabeth Grove last round which has seen them go one point off third place. Currently sitting in fifth and ten points away from second, Adelaide Jaguars will be unable to push for a place in this season’s promotion playoff match. In other action will see Modbury Jets face Elizabeth Grove at Smith Partners Stadium. Currently sitting in sixth, Modbury Jets are now five points away from fifth place and are unable to fight for promotion this season meaning the team will want to have a strong and enjoyable end to the season. Elizabeth Grove will be desperate to better their performance last week which saw them lose 7-0 to Adelaide Jaguars. To close Round 16, Campbelltown City will look to secure their first win of the season as they face second-place South Adelaide. Campbelltown City will be pleased to return to league competition as they play their first match since the 10th of July. South Adelaide will search to confirm their place in the promotion playoff match, with the team now sitting nine points clear from third place Cove FC while still putting pressure on league leaders Flinders United.